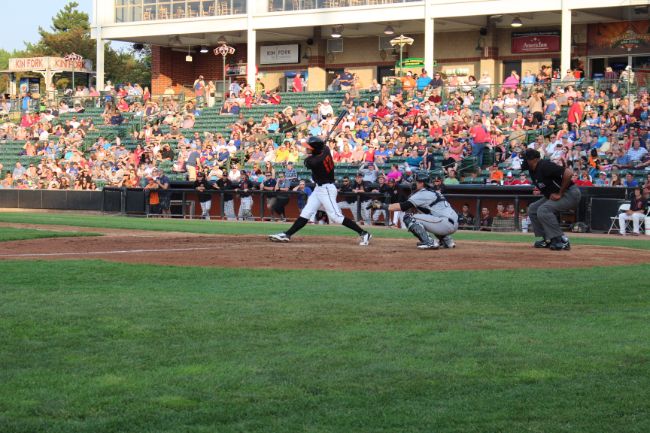 The Schaumburg Boomers, presented by Wintrust Community Banks, suffered a 6-3 loss to the Florence Freedom on Thursday night, dropping their first series of the second half of the season.

The Freedom used four different frames to plate runs on their way to the victory.

Florence scored in the first for the third straight game, as Andre Mercurio doubled home a pair of runs to give the Freedom an early 2-0 lead.

The home team responded with three runs of their own in the bottom half of the frame. Kyle Ruchim began the inning with a double, followed by a Josh Gardiner single. Zack Weigel would be hit by a pitch to load the bases before a David Harris walk scored the first Boomer run. Sean Godfrey would also be hit by a pitch, tying the game up at two. The Boomers would take the lead on a groundout by Cosimo Cannella.

The Freedom fought back in the second as Andrew Godbold singled to lead-off the inning before an error would allow him to reach second. Godbold would score on a Daniel Fragga single, knotting the game at 3-3.

The Freedom scored a pair of two-out runs in the fifth when Brower recorded another RBI-double and scored on Godbold’s second single of the game, extending the Florence lead to 6-3.

The Boomers, who have spent all but one day in first place of the East Division, now welcome Gateway to Boomers Stadium for a three-game set beginning Friday night at 6:30 p.m.