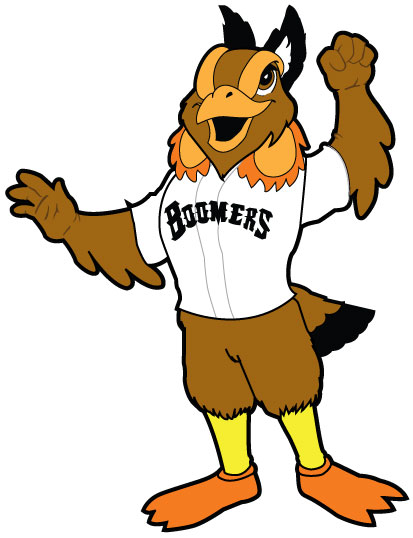 Not so long ago, in the shadows of Mount Rushmore, a special Boomer was born. Hatched in a nest on the ledge between presidents Roosevelt and Lincoln, Coop grew up with his family and learned about the history of his species, the Greater Prairie Chicken.

Coop is descended from a variety of birds that used to live on prairies throughout the Midwest, including the land where Schaumburg is today. While he loved his home among the majestic presidents, he longed to travel and see the booming grounds of his ancestors.

“What are booming grounds?” you might wonder. Well, Greater Prairie Chickens are amazing creatures. Why? You might not believe it, but they’re special because they dance!

To see the Boomer dance is really something special. Coop would practice every day, charging, whooping, stomping, splaying the feathers around his head and making his signature booming sound by puffing up the bright orange pouches on either side of his face.

Sometimes when he was feeling especially brave and proud, he would even dance for the tourists. He loved the cheers he’d hear from the crowd. They’d come from far and wide to see the faces on the mountainside but delight in the unexpected joy of Coop and his dance.

Soon, he was famous for his dancing throughout the land, and he knew that he’d found his way to see the world beyond his home. Apart from taking his show on the road, he was also intrigued by the idea of seeing a baseball game. He’d seen the many baseball hats on the people who visited and hoped one day to see the game they played while wearing them.

One day, he noticed a group of people who were all wearing orange baseball caps, and what did he see? On each orange cap he saw a picture that looked just like a Greater Prairie Chicken! He knew it was fate—he had to follow them wherever they’d go!

After bidding his family farewell, Coop stowed away in the family’s car and traveled the many miles to his new home—all the way to the Chicago suburbs. When he arrived, he discovered something amazing. This wasn’t a family—it was a group of baseball players. His dreams were all coming true!

Coop found his new home…the Home of the Schaumburg Boomers. Coop was welcomed with open arms to be the official mascot of the baseball team. He loves meeting all of the Boomers fans, showing off his booming dance, and welcoming everyone to Boomer Country!