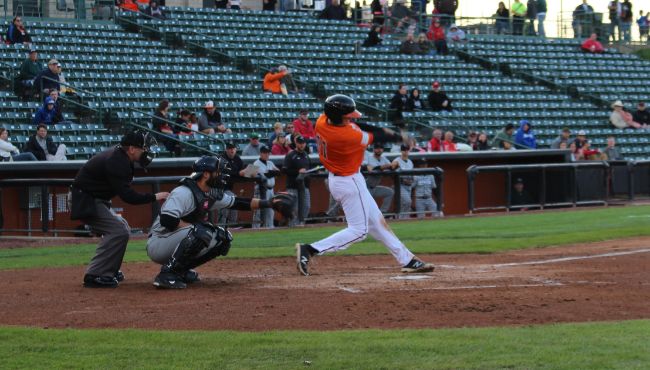 O’FALLON, MO — The defending Frontier League champion Schaumburg Boomers presented by Wintrust Community Banks, rallied from a 2-0 deficit but came up short in a 4-2 defeat at the hands of the River City Rascals to remain winless on the road.

Gerrion Grim hit a two-run homer in the bottom of the second inning against Schaumburg starter Darrell Thompson to open the scoring. Thompson worked three innings in his first start. Kenny Towns ended a scoreless string of 21.1 innings with a one-out solo homer in the top of the fourth, drawing Schaumburg within 2-1. Nick Oddo opened the fifth with a bunt single and moved to third on a Jack Parenty single before scoring the tying run on a double play.

Both bullpens put the clamps down until the eighth inning. River City had not recorded a hit since the second before putting together four in scoring a pair in the eighth to score the win. Schaumburg struck out 13 times in the contest while the pitching staff issued seven walks. Parenty logged a pair of hits for the Boomers. Dylan Stutsman struck out five in two scoreless innings of relief. Schaumburg is 0-6 on the road this year and with the loss matched the worst record after 12 games in team history at 3-9.

Schaumburg returns home Friday night to begin another action-packed weekend of events with fireworks on Minecraft Night. RHP Joe Hauser (1-0, 2.08) makes the start as the Gateway Grizzlies visit. Make the Boomers part of your plans this season by calling (847) 461-3695.