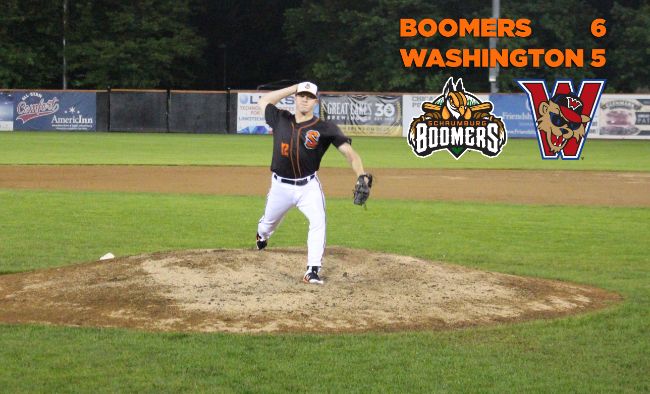 SCHAUMBURG, IL — The defending Frontier League champion Schaumburg Boomers, presented by Wintrust Community Banks, kicked off a six-game homestand by rallying to a 6-5 win over the leaders of the East Division, the Washington Wild Things.

Dylan Jones opened the scoring with a two-run single in the bottom of the second inning. Washington starter Trevor Bradley settled down, retiring the next 15 batters as his team opened a 5-2 advantage. The Wild Things tied the game with two unearned runs in the top of the fourth and added one in the sixth to go with two more in the seventh. Collin Ferguson broke the string of 15-straight by drilling his first homer of the year over the wall in right in the bottom of the seventh. Josh Gardiner drove home Zack Weigel with a two-out single and Kenny Towns walked with the bases loaded to force in the tying run. Sean Godfrey collected a bloop doubled to start the eighth and scored the winning run on a single from Weigel.

Starter Joe Hauser worked 5.2 innings and allowed just one earned run but did not factor in the decision. Darrell Thompson improved to 3-0 by recording the final out of the eighth. Jake Joyce saved his seventh of the year, leaving the tying run at second. Weigel tallied two hits and has reached base in 14 consecutive contests. Jack Parenty also tallied a pair of hits as the Boomers finished with eight. Parenty owns a career best eight-game hitting streak.

The Boomers (19-17) continue the series on Saturday night at 6:00 p.m. with an Orange Out. The first 1,500 fans through the gates will receive an orange Boomers t-shirt. Schaumburg has not announced a starter while Washington will send newly signed RHP Michael Austin. Make the Boomers part of your plans this summer by calling (847) 461-3695.