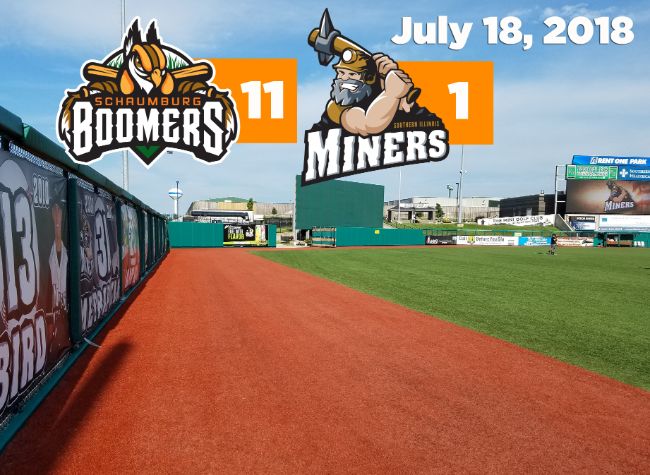 MARION, IL — The defending Frontier League champion Schaumburg Boomers, presented by Wintrust Community Banks, scored nine runs in the top of the ninth inning to run away from the Southern Illinois Miners, breaking open a pitcher’s duel in strolling to an 11-1 victory.

The contest did not see any scoring until the sixth inning. Kit Fowler, activated from injured reserve before the game, and Southern Illinois starter Geno Encina battled inning-to-inning. The Miners strung together three straight two-out singles to take a 1-0 lead in the sixth. Schaumburg followed with two unearned runs in the top of the seventh, tying the game when pinch hitter Clint Hardy reached on an error and taking the lead on a Jack Parenty safety squeeze.

The floodgates opened in the ninth with Schaumburg taking advantage of two more errors during a nine-run outburst, the most runs in an inning this season. Zack Weigel and Collin Ferguson notched RBI singles after a run crossed on an error. Michael Hartnagel tallied the first two RBIs of his career with a two-out, two-run single and Sean Godfrey added a three-run double.

Fowler allowed one run in 5.2 innings in his return, walking two and striking out three. The bullpen notched 3.1 scoreless to help the team rally. James Mulry picked up the win in relief, moving to 3-0 on the year. Ferguson picked up four hits as the Boomers finished with 14. Parenty added three.

The Boomers (29-26) will aim for a second three-game sweep of the season on Thursday night at 5:05 p.m. RHP Joe Hauser (5-4, 3.72) makes the start in the series finale against the opening night starter for Schaumburg RHP Steven Ridings (5-3, 4.36). Ridings was traded to Southern Illinois in June. Schaumburg returns home on July 20 for just the second series in the month of July on Stranger Things Night featuring postgame fireworks. Make the Boomers part of your plans this summer by calling (847) 461-3695.