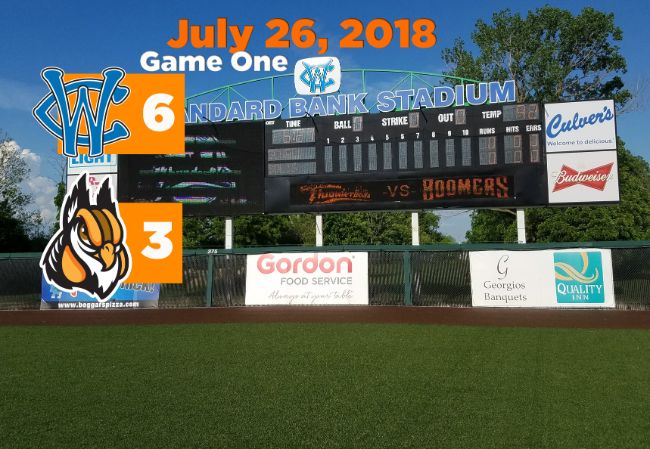 CRESTWOOD, IL — The defending Frontier League champion Schaumburg Boomers, presented by Wintrust Community Banks, could not overcome a five-run second inning for the Windy City ThunderBolts in dropping the opener of day/night doubleheader by a 6-3 score.

Zack Weigel homered for a second consecutive day, handing the Boomers a 1-0 lead in the top of the first with his sixth homer of the year. The longball came with two outs against Windy City starter Connor Bach and would be the only lead of the game. Riley Krane homered to begin the bottom of the second inning, tying the game with the first of five runs off Schaumburg starter Kit Fowler.

The Boomers bounced Bach from the game in the top of the third, scoring twice on just one hit after drawing three walks. Weigel coaxed a bases loaded walk and Ty Moore lifted a sacrifice fly. Patrick Ledet came on in relief and retired 17-of-18 to quell any chances of a rally. Windy City tacked on an insurance run in the eighth against Joe Hauser, who entered in relief after starting on Tuesday. Schaumburg brought the tying run to the plate in the ninth, but Devin Raftery induced a double play to end the game.

Fowler threw six innings but suffered the loss, allowing five runs. The offense managed just six hits in the contest. Jack Parenty produced a pair along with Moore. Parenty has reached base in 17 straight while Weigel owns a 16-game stretch. The loss brought an end to a four-game win streak.