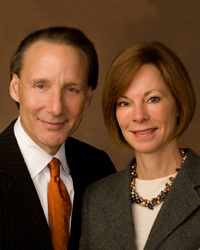 Pat and Lindy Salvi joined the world of professional minor league baseball ownership in 2008 by purchasing the Gary SouthShore RailCats. After finding much success with the RailCats, Salvi Sports Enterprises was founded in 2011 to hold a 100% interest in the Schaumburg Boomers.

The mission of Salvi Sports is to provide exceptional levels of fun, affordable family entertainment in safe, nostalgic yet modern environments—hometown baseball games. The 2020 season will be the Boomers’ 9th season in the Frontier League, a 14-team independent baseball association. The Boomers have won three Frontier League Championships and three “Organization of the Year” awards. The Boomers consistently lead their league in attendance.

Pat Salvi is the managing equity partner of the prominent Chicago personal injury law firm, Salvi Schostok & Pritchard, P.C. He attended Saint Mary’s University in Winona, Minnesota where he received his Bachelor of Arts degree, going on to earn his Juris Doctorate from the University of Notre Dame. He has published numerous articles in law journals, lectured at legal seminars, taught classes at universities such as Northwestern, Harvard and Notre Dame.

Mr. Salvi is one of the most prominent attorneys in the country, consistently recognized with “Best Lawyers in America”, “Illinois Super Lawyer”, and “The Leading American Attorneys of Illinois” accolades. Mr. Salvi’s peers have selected him to the Illinois Super Lawyers Top 10 List every year since 2014 and Leading Lawyers Magazine has named Mr. Salvi to three “Top Ten” lists every year since 2016. In 2017, Mr. Salvi served as lead counsel on a trial team that obtained an Illinois record-high $148 million jury verdict.

Salvi currently serves as the Chairman of the Law School Advisory Council at the University of Notre Dame and also serves as the Director of the RailCats as its representative with the American Association of Independent Baseball.

Salvi Schostok & Pritchard, P.C. represents victims in personal injury, medical malpractice and wrongful death cases. Under his leadership, the firm has recovered more than $1.5 billion in verdicts and settlements on behalf of injured clients.

Lindy Salvi graduated from Saint Mary’s College in South Bend, Indiana with a nursing degree, meeting Pat while at school. While with raising their five sons, Lindy became an active community volunteer. She has been involved as a member, committee chairperson, board member and chairperson with:

Salvi is also an instructor of AntiGravity Fitness, a practice that combines conventional yoga, pilates, and barre exercise programs with aerial/suspension techniques.

The Salvi family is excited and thrilled to be part of the Schaumburg community and to lead the Boomers to yet another championship season. Go Boomers!