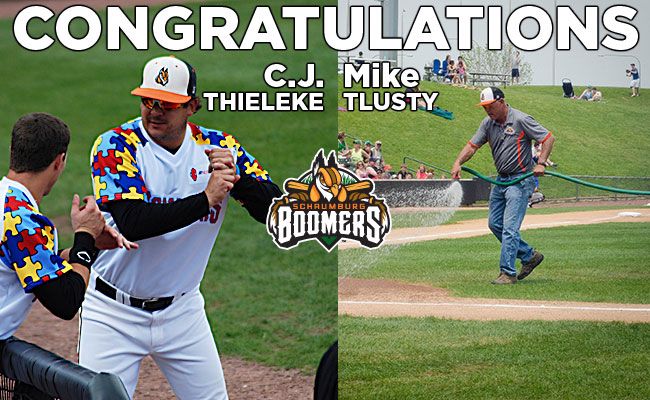 SCHAUMBURG, Ill. — The Schaumburg Boomers, presented by Wintrust Community Banks, had two representatives receive end of the season Frontier League Awards with Hitting Coach C.J. Thieleke being named Coach of the Year and Mike Tlusty taking home Groundskeeper of the Year Honors, it was announced today.

In his third season as Hitting Coach, Thieleke has been a major part of the Schaumburg Boomers success story. During this three year run that included the 2013 Frontier League Championship, the Boomers own a sparkling 171-114 record which is good for a .600 winning percentage. With three games to play in 2014, Schaumburg is tied for the league’s best record at 58-35.

“We are very honored to have C.J. named Coach of the Year, said Boomers Manager Jamie Bennett. “It often goes unrecognized in professional baseball how much time and effort coaches put in. C.J. loves the games as much as anyone I have been involved with and has a great eye for players.”

The 2014 season has been by far the best offensive season in the club’s short history with the Boomers batting .283 as a team, which is good for third best in the league, and Schaumburg’s 541 runs scored are second only to the River City Rascals in the Frontier League.

“C.J. is at the park early every day to give early work to any hitter who wants it – no questions asked,” Bennett added. “He takes pride in his players and this team, and I am extremely happy to see his efforts be recognized.”

It’s incredible to look at the month-by-month statistics from the past three years to see the dramatic improvement of the Boomers hitters over the course of the season. Each of the last three campaigns has begun with the Schaumburg offense posting its lowest average as a team in the first month of the season. From there, the offensive output steadily picks up the pace peaking during the crucial summer days of August.

Prior to joining the Boomers, Thieleke served as Third Base Coach for the Gary SouthShore RailCats in 2011 and the Field Manager for the summer collegiate Madison Mallards for six seasons from 2005-10 where he posted a 230-178 record in the Northwoods League.

Tlusty is also an original member of the Schaumburg Boomers and serves as the Boomers Director of Facilities in charge of the maintaining the playing surface and Boomers Stadium.

“The Boomers are so fortunate to be able to play on a major league caliber field throughout the year, and one that’s maintained by a major league caliber groundskeeper!” Boomers President/General Manager Andy Viano exclaimed. “Mike Tlusty is unquestionably one of the most skilled, hardest-working groundskeepers in the country. He’s been making our home look beautiful for three years and could not be more deserving of this honor.”

“I’m truly humbled to receive this award, but I can’t do it alone,” Tlusty said. “The relationships developed over the last couple years have gone a long way towards keeping our field pristine with such incredible partners as Van’s Enterprises, National Seed, Buck Brothers Inc., and the Schaumburg Park District along with many others. All have been integral parts of our grounds operation, and of course my hard-working grounds crew has been there every step of the way as well. This is definitely a team award and I view it more as playing surface of the year rather than an individual honor.”

Summer isn’t quite over yet so don’t miss the fun and affordability of Schaumburg Boomers Baseball! In addition to tickets for the rest of the regular season, Boomers 2014 Playoff Tickets are available now online at www.boomersbaseball.com, by calling 847.461.3695, or in person at the Boomers Stadium Box Office located at 1999 S. Springinsguth Road in Schaumburg.