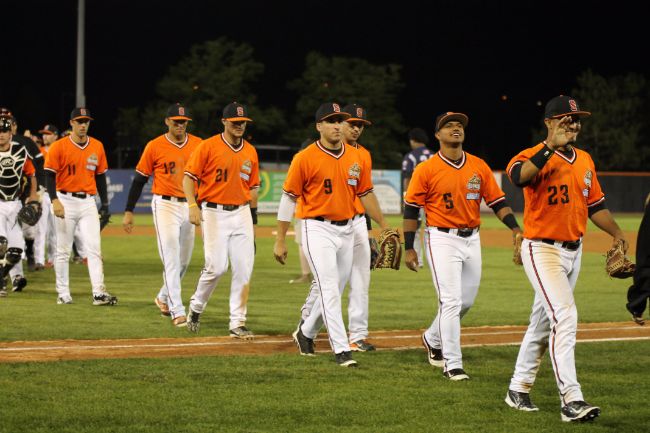 SCHAUMBURG, IL — The Schaumburg Boomers, presented by Wintrust Community Banks, waited out a weather delay of over two hours before rallying to a 3-2 victory over the defending Frontier League champion Evansville Otters in the opener of a Memorial Day weekend series.

Following a lengthy delay, Evansville opened a 2-0 lead with runs in the first and third against Schaumburg starter Kagen Hopkins. Hopkins settled down, working a season high 6.2 innings to earn his second win. The Boomers were finally able to break through in the sixth, taking advantage of a pair of errors to score three times. The team had just one hit entering the inning but posted three in the deciding frame. David Harris tied the game with a two-run single through the right side and Cosimo Cannella, who entered as an injury replacement in the fifth, logged an infield hit to plate the winning run.

The bullpen trio of Austin Kerr, Garrett Kelly and Rob McDonnell combined for the final 2.1 innings to preserve the victory. McDonnell struck out the side in the ninth. Sean Godfrey posted two hits as the Boomers notched five in the decision.

The series will continue on Saturday night at 6:00 p.m. Fireworks follow the contest on Despicable Me Night. LHP Preston Jamison (0-0, 6.48) receives the ball against a former Schaumburg hurler and the MVP of the Frontier League Championship Series LHP Hunter Ackerman (1-1, 9.31). Make the Boomers part of your plans this season by calling (847) 461-FOWL (3695). Hear all of the game action this season on AM 1410 WRMN with the voice of the Boomers, Tim Calderwood.