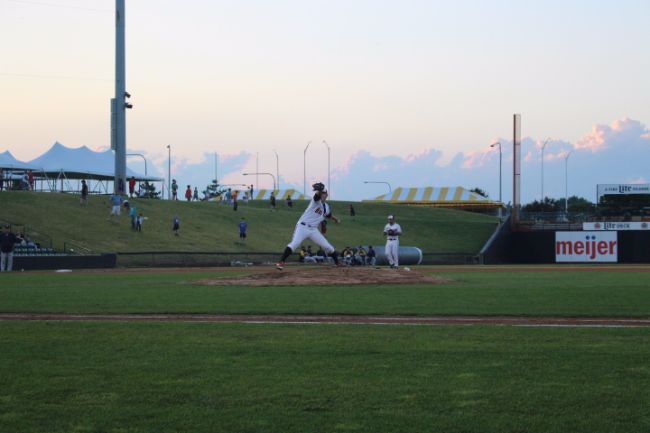 NORMAL, IL — The Schaumburg Boomers, presented by Wintrust Community Banks, completed a roadtrip sweep with a 6-3 decision over the Normal CornBelters on Sunday.

Schaumburg scored in the first inning for a fifth consecutive contest, setting the tone with three early tallies. Kyle Ruchim led off with an infield single, stole second and scored on an RBI single from the league leader in RBIs, Seth Spivey. Kenny Towns made it 2-0 with an RBI double and an infield single from Sean Godfrey capped the scoring in the opening frame. Two more runs came across in the third to extend the lead and another infield hit from Godfrey in the fourth pushed the edge to 6-0. Normal scored three runs in the seventh against the bullpen but could pull no closer.

Gunnar Kines pitched shutout ball for the third time in his seven starts, working six blank innings to improve to 5-1 on the year. Kines leads the league in ERA. Alec Kenilvort tossed the ninth for his fourth save. Godfrey finished with four hits and two RBIs. Spivey notched his 17th multi-hit game of the year, posting a 2-for-4 showing for the top hitter in the league.

The Boomers own the top record in the league at 25-8 and have won a season best six in a row. The team returns home on Tuesday to open a six-game homestand against the Windy City ThunderBolts at 6:30 p.m. RHP Kagen Hopkins (3-1, 4.29) starts for Schaumburg in the opener against LHP Jake Fisher (2-2, 5.24). Make the Boomers part of your plans this season by calling (847) 461-FOWL (3695). Hear all of the game action this season on AM 1410 WRMN with the voice of the Boomers, Tim Calderwood.