Kines Purchased by the Mets 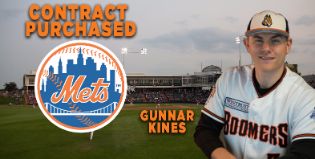 NORMAL, IL — The Schaumburg Boomers, presented by Wintrust Community Banks, are proud to announce that the contract of starting pitcher Gunnar Kines has been purchased by the New York Mets.

Kines, the first left-handed opening night starter in Schaumburg history, made his final appearance as a member of the Boomers on Sunday afternoon at Normal. Kines threw six shutout frames, lowering his dazzling ERA to 1.31, best in the league. Kines, who posted three shutout appearances and allowed just six runs all year, struck out five to take over the league lead with 53 punchouts in just 41.1 innings. The second year Boomer claimed his fifth victory, tying for the league lead.

The lefty struck out 10 batters twice this season, becoming just the third pitcher in team history to tabulate multiple double-digit strikeout performances and the second to achieve the feat in the same season. Kines set the tone for the 2017 season, which currently shows Schaumburg owning the top record in the league with the best start in franchise history, by throwing five shutout innings on opening night.

“We are all very excited for Gunnar,” sixth-year Schaumburg manager Jamie Bennett said. “He has worked very hard and done an outstanding job for us in his time here. We wish him the best and look forward to watching him extend his career with the Mets.”

Kines, who was in his second season with Schaumburg, started seven games this season. The South Carolina native will receive a second chance in the affiliated ranks after pitching in the Marlins system in 2015, reaching Low-A. Kines, who will report to Brooklyn in the New York-Penn League, flirted with a no-hitter in his final start of 2016, allowing just one hit in eight innings when Windy City’s Blair Beck hit a solo homer with two outs in the eighth.

Kines struck out 104 batters last season in 112.2 innings of work for the Boomers, becoming the second pitcher in franchise history to accumulate 100 strikeouts in a season. The University of Mount Olive product leaves second all-time in strikeouts with 157. Kines also sits fifth all-time in innings with 154 and is tied for fourth in career starts with 25.

Kines becomes the first player from the Boomers to have his contract purchased this season and the eighth in franchise history to be sold during the season. Three players were purchased last season, Kyle Ruchim, Josh Gardiner, and Nick King. Two former Boomers are currently in the affiliated ranks with King and TJ Bennett. The Frontier League, celebrating its 25th season in 2017, has seen a bevy of pitchers purchased in the last week with six since June 13, all to different major league organizations. Eight pitchers have been purchased around the league this season.

The Boomers, who own the top record in the league at 25-8, return home to open a six-game homestand on Tuesday night at 6:30 p.m. against the Windy City ThunderBolts. Make the Boomers part of your plans this season by calling (847) 461-FOWL (3695). Hear all of the game action this season on AM 1410 WRMN with the voice of the Boomers, Tim Calderwood.