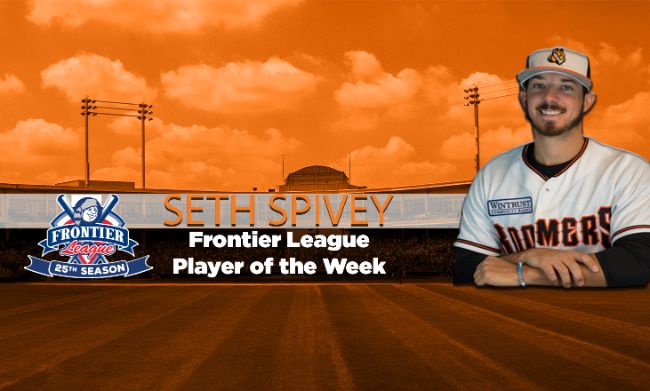 Schaumburg Boomers first baseman Seth Spivey has been named the Frontier League Player of the Week, the league announced Monday.

Spivey entered the week as the league’s leading hitter and stayed there with this week’s performance.

The Brenham, Texas native recorded four hits in a mid-week series with the Windy City Thunderbolts, including a 4-for-6 showing in the Boomers finale. Spivey also drove home six runs, three doubles and hit his seventh homer of the season during the three-game set versus the Thunderbolts.

The utility infielder tallied five more hits versus Washington over the weekend.

The Abilene Christian University has reached base safely in the last 16 games, also owning a nine-game hitting streak. He has also recorded 21 multi-hit games to this point in the season.

Spivey, a 10th round pick of the Rangers in 2014, spent three seasons in the Texas organization. Spivey hit .261 during his tenure while connecting on 13 homers with 178 RBIs and reached High-A with the High Desert Mavericks.

The Boomers, owners of the best record in the Frontier League, hit the road for six games this week, beginning with a trip to Joliet on Tuesday night. First pitch from Silver Cross Field is scheduled for 7:05 p.m.