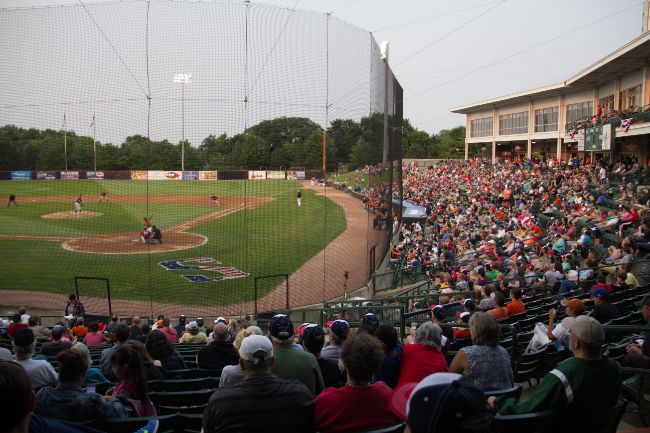 SCHAUMBURG, IL — The Schaumburg Boomers, presented by Wintrust Community Banks, treated an Independence Day crowd to a 10-9 win over the Southern Illinois Miners on Tuesday night.

The Boomers fell behind 4-0 in the top of the first inning as start Michael Wood, in his pro debut, allowed six straight to reach with two outs. Wood settled down and retired the final 10 batters he would face, providing an opportunity for the team to rally. Schaumburg scored three runs in the bottom of the second and took a 5-4 lead in the third on a two-run homer from All-Star Seth Spivey, his 10th of the season. The lead reached 9-4 with four more in the fifth. David Harris and Ryan O’Malley logged RBI singles while Jack Parenty posted a two-run single. Southern Illinois made it interesting, putting the tying run in scoring position in the top of the ninth before Jake Joyce punctuated the win with a strikeout to tally his seventh save.

Alex Luna earned the win by piggy-backing Wood. Parenty finished with four hits out of the ninth slot in the order. Harris tallied three with two RBIs. Josh Gardiner also notched a pair of hits. Spivey, the leading hitter and top-RBI man in the league, has reached base in 23 consecutive games, the fourth longest streak in team history. Spivey owns a pair of 20+ streaks this season.

The Boomers, who lead the East Division, will take Wednesday off before wrapping the series with Southern Illinois on Thursday night at 6:30 p.m. on a Thirsty Thursday. LHP Preston Jamison (0-0, 4.82) makes the start for the Boomers against RHP Ethan Gibbons (5-2, 5.00). Make the Boomers part of your plans this season by calling (847) 461-FOWL (3695). Hear all of the game action this season on AM 1410 WRMN with the voice of the Boomers, Tim Calderwood.