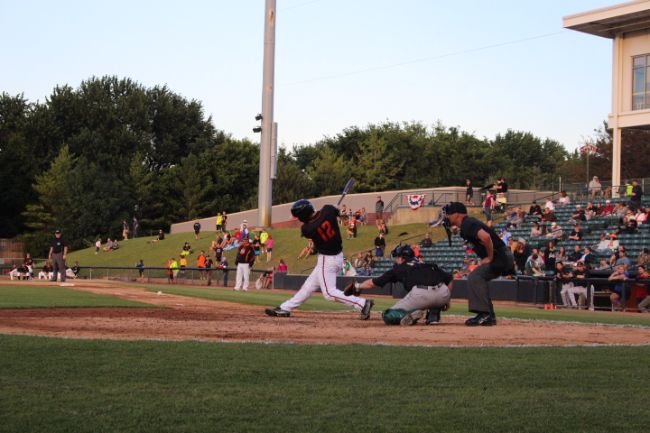 O’FALLON, MO — The Schaumburg Boomers, presented by Wintrust Community Banks, chased the starter in the top of the first innings and raced to a 9-0 lead early en route to a 14-1 road victory over the River City Rascals.

Kyle Ruchim led off the game with a walk and Zack Weigel followed with a two-run homer to give Schaumburg a 2-0 edge just two batters into the contest. Josh Gardiner logged a two-run single later in the frame. Weigel homered again in the second, another two-run blast. Gardiner added an RBI single in the inning and James Keller plated a pair with a two-out single. Tanner Rahier in his second game, singled home two in the fourth and Gardiner blasted a three-run homer in the fifth.

Kagen Hopkins allowed just one run in six innings to improve to 6-2 on the year. The offense slugged 16 hits and scored 10 or more for the 11th time this year. Gardiner picked up three hits and drove home six while matching a single game record with three steals. Weigel owns four homers in the past three contests and finished with four RBIs. Rahier, Keller, Seth Spivey and Sean Godfrey each finished with two hits as all nine in the lineup reached base. Spivey has reached in 26 consecutive contests.

The Boomers (33-16), who lead the East Division and own the best record in the league, will conclude the first half of the season on Sunday afternoon at 4:05 p.m. Make the Boomers part of your plans this season by calling (847) 461-FOWL (3695). Hear all of the game action this season on AM 1410 WRMN with the voice of the Boomers, Tim Calderwood.