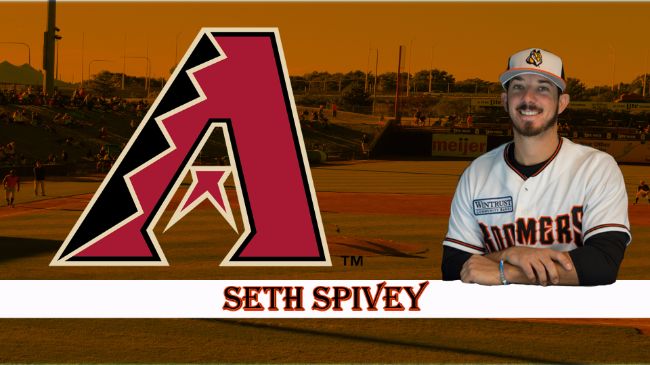 SCHAUMBURG, IL — The Schaumburg Boomers, presented by Wintrust Community Banks, are proud to announce that the Frontier League’s leading hitter, Seth Spivey, has had his contract purchased by the Arizona Diamondbacks.

Spivey had been putting together one of the top offensive seasons in league history through the first 53 games of the year and was on pace to challenge some league records while re-writing the franchise marks in nearly every offensive category. The All-Star was hitting a league best .417 with 10 homers and 50 RBIs. The average was over 50 points higher than anyone else at the time of his signing.

Spivey, who played the entire All-Star Game at second base and notched a hit, appeared at five different positions for the Boomers and posted 24 multi-hit games including seven with three or more. Spivey also notched 13 games featuring multiple RBIs with five of three or more. The left-handed hitter, who matched a then single-game team record with five hits at Gateway on June 14,  led the league in runs scored, total bases, on-base percentage and slugging percentage while ranking second in doubles and extra-base hits.

Spivey capped his season with the Boomers by notching a pair of hits on Sunday. The Texan was kept off base in a game just twice all season and leaves having reached base in 30 consecutive contests, a team record. Spivey also left his mark on the team’s record book, ranking seventh in homers and RBIs, while sitting ninth in runs scored.

“We are very proud of Seth,” sixth-year Schaumburg manager Jamie Bennett said. “He has done an outstanding job here and is very deserving of this opportunity. We will miss his ability on the field and in the clubhouse.”

Spivey came to the Boomers following three seasons with the Rangers after being chosen in the 10th round of the 2014 draft out of Abilene Christian University. Spivey set a career high for homers and was approaching career marks in several other categories.

Spivey is the fourth player to have his contract purchased this season, the most in team history and most in the league this year. Spivey joins Alec Kenilvort (Brewers), Gunnar Kines (Mets) and Tom Colletti (Padres) from the 2017 squad. Spivey will not have to move far as he is expected to join the Kane County Cougars, Low-A affiliate of the Diamondbacks. Spivey is the seventh former Boomer to be active in the affiliated ranks this year. Nick King (Pirates), TJ Bennett (Giants), Daniel Hoy (Mets), Kenilvort, Colletti and Kines are all currently on rosters.

The Boomers, who have led the East Division all but one day this season and own the top record in the league, continue a six-game homestand on Thursday night against the Florence Freedom at 6:30 p.m. Make the Boomers part of your plans this season by calling (847) 461-FOWL (3695). Hear all of the game action this season on AM 1410 WRMN with the voice of the Boomers, Tim Calderwood.