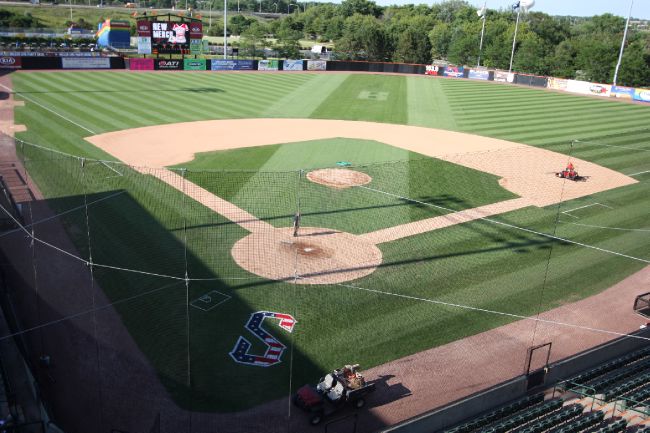 EVANSVILLE, IN — The Schaumburg Boomers, presented by Wintrust Community Banks, did not trail in cruising to a 9-4 win over the Evansville Otters on the road Saturday night.

The Boomers, who have not trailed in the series, jumped ahead just three batters into the game on an RBI single from John Holland. Josh Gardiner added a two-out RBI single later in the frame. Evansville picked up an unearned run in the bottom of the frame to pull within 2-1. David Harris demolished a two-run homer in the third and added a solo blast in the fifth for his third multi-homer game of the season. Schaumburg scored in five different innings and bashed out 14 hits, building a 9-1 lead.

Kagen Hopkins won his seventh game of the season by working six innings and allowing just one unearned run. Hopkins retired 11 straight from the first through the fifth and finished with eight strikeouts. Harris became the first player in team history to notch three multi-homer performances, upping his season total to 11. Gardiner and Cosimo Cannella tallied three hits apiece. Opie Brodbeck reached in all five appearances with two singles and three walks.

The Boomers (43-21), who continue to lead the East Division with the best record in the league, will aim for the sweep in the roadtrip finale on Sunday at 5:05 p.m. RHP Conrad Wozniak (2-1, 3.29) takes the ball while the defending Frontier League champs counter with RHP Luc Rennie (4-2, 2.95). Make the Boomers part of your plans this season by calling (847) 461-FOWL (3695). Hear all of the game action this season on AM 1410 WRMN with the voice of the Boomers, Tim Calderwood.