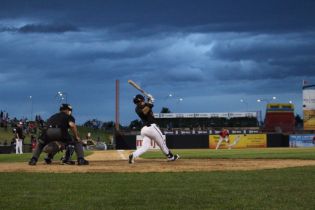 WASHINGTON, PA —The Schaumburg Boomers, presented by Wintrust Community Banks, claimed their second division championship in franchise history with an 8-4 win over the Washington Wild Things to secure a third trip to the playoffs in team history.

After falling behind 1-0 in the second, the Boomers scored in five consecutive frames, opening leads of 3-1 and 6-4. Jack Parenty handed Schaumburg the first lead with a two-run single in the top of the fourth. Washington responded with three runs in the bottom of the inning against starter Brandon Quintero. Sean Godfrey tied the game with a two-out RBI single in the fifth and Zack Weigel, activated from injured reserve before the contest, singled home the go-ahead run in the sixth. John Holland followed with a single against the bullpen to extend the edge. Two more runs came across in the seventh as the Boomers plated six runs with two outs.

Quintero worked six innings to earn the win, his fourth. The righty retired the final eight batters and finished with two walks and seven strikeouts. Rob McDonnell, Kyle Westwood and Evan Boyd combined on sewing up the clincher as the pitching staff struck out 10. The offense banged out 13 hits. The bottom of the lineup proved to be a thorn in the side of the Wild Things, producing seven hits, five runs and four RBIs. Parenty finished with three hits and three RBIs while Keller notched three hits and scored twice.

The division championship is the first since 2013 when the team won the West. Schaumburg tied for the West Division crown in 2014 but lost a head-to-head tiebreaker. The Boomers own a pair of league championships in both previous playoff appearances.