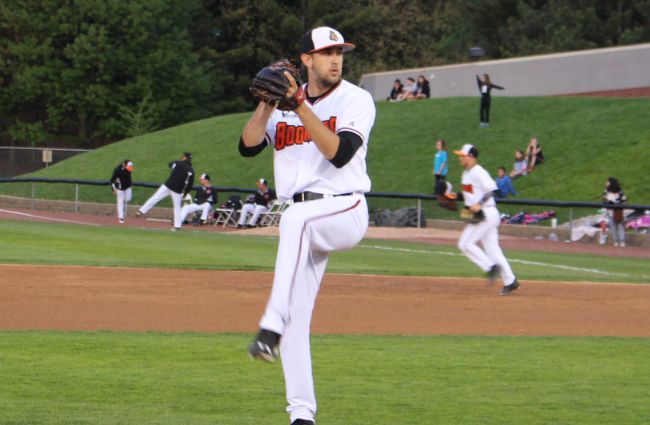 SCHAUMBURG, IL — The defending Frontier League champion Schaumburg Boomers presented by Wintrust Community Banks, waited through a rain delay of almost an hour before rallying from down three runs to score a 6-5 road win over the Windy City ThunderBolts on Wednesday night.

Windy City jumped out to a 3-0 lead with a two-out three-run homer from Larry Balkwill in the bottom of the first. The runs were the only ones allowed by starter Steven Ridings in 4.2 innings of work. Newcomer Collin Ferguson, signed before the game, and Clint Hardy posted RBI singles in the third to bring the Boomers within 3-2. Windy City scored twice against the bullpen in the sixth to open a 5-2 edge. Sean Godfrey singled home a pair in the top of the seventh to trim the deficit to 5-4 before drilling a two-run go-ahead homer against closer Devin Ratery in the ninth.

Schaumburg finished with 12 hits in the victory. Godfrey notched four, falling a triple shy of the cycle. The outfielder drove home four. Ferguson and Hardy each added a pair in the first road win of the season. Chris Hall picked up the win in relief while Jake Joyce shut the door for his second save of the season.

The brief series draws to a close on Thursday night at 7:05 p.m. RHP Joe Hauser (1-0, 2.50) starts for the Boomers opposite LHP Jaramy Jacobs (0-1, 5.00). The Boomers return home Friday night to begin a six-game homestand on Looney Tunes Night featuring postgame fireworks. Make the Boomers part of your plans this season by calling (847) 461-3695.