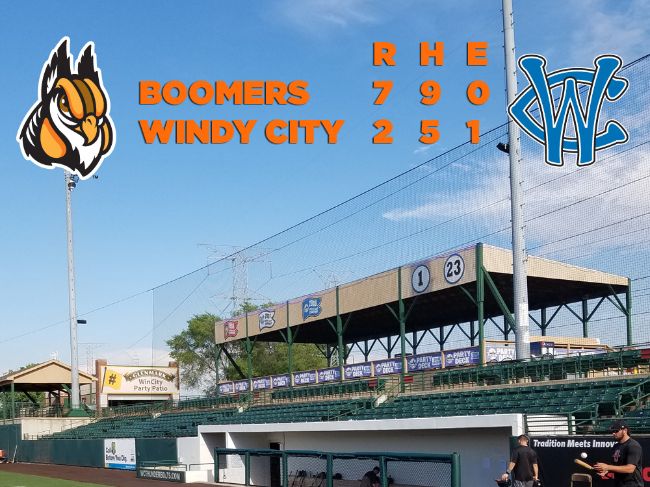 Schaumburg loaded the bases in the top of the second and scored a pair of runs with two outs to set the tone. Jack Parenty singled home Ty Moore with the first run and Sean Godfrey followed by coaxing a bases loaded walk to force home Kenny Towns. The Boomers drew nine walks in the contest. Two more runs scored in the fourth inning with one crossing on a double play and another coming home on a single from Collin Ferguson. Ferguson has driven home two runs in his first two games with the team.

The run support was more than enough for Joe Hauser. Hauser twirled seven innings and improved to 2-0 on the season, allowing just one run. The second-year Boomer retired 13 straight from the third through the seventh. Schaumburg put the game out of reach with a pair in the sixth without a hit, using three walks, two wild pitches and a hit by pitch.

Parenty paced a nine-hit attack with three, also drawing a walk. James Keller added two hits. Eight members of the lineup reached base. Dylan Stutsman and Mitch Schulewitz also appeared on the mound in the victory.

The Boomers return home on Friday night to begin a six-game homestand with the opener of a busy weekend. Friday night is Looney Tunes Night, featuring special jerseys and postgame fireworks. RHP Kit Fowler (0-3, 5.68) makes the start for the Boomers. Make the Boomers part of your plans this season by calling (847) 461-3695.