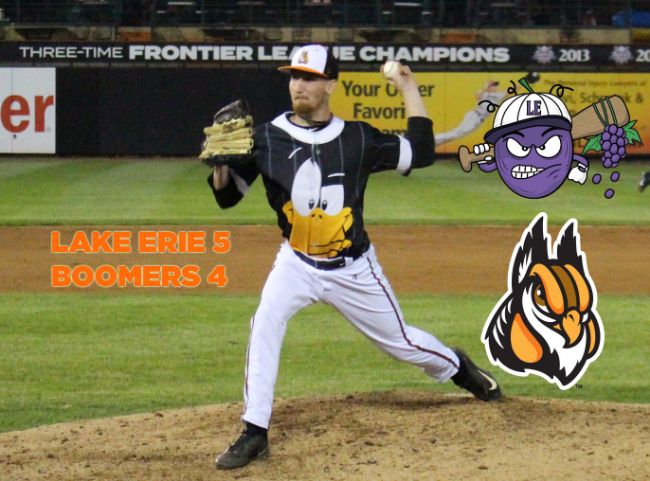 SCHAUMBURG, IL — The defending Frontier League champion Schaumburg Boomers, presented by Wintrust Community Banks, made a frantic late rally but dropped a 5-4 decision to the Lake Erie Crushers in the opener of a home weekend series.

Lake Erie scored four runs in the top of the fourth against Schaumburg starter Kit Fowler. The first four batters of the inning reached base for the Crushers, who managed just two hits in the inning and four in the contest. Fowler suffered the loss, working 3.2 innings. The Boomers rallied with three fifth-inning tallies to draw within a run at 4-3. Ty Moore drove a two-run single up the middle with the bases loaded and Kenny Towns followed suit with an RBI single. Trailing 5-3 entering the bottom of the ninth, the Boomers loaded the bases with no outs but scored just one run on a fielder’s choice from Clint Hardy, stranding the tying run at third.

The Schaumburg pitching staff walked seven and hit two, but struck out 11 in the defeat. The bats delivered 12 hits. Moore and Josh Gardiner each posted three while Sean Godfrey tacked on two.

The Boomers continue the series on Saturday night at 6:00 p.m. on Half-Way to Oktoberfest with specialty jerseys and specials on beer and brats along with postgame fireworks. LHP Gunnar Kines (0-0, 0.00) will make his second start of the season for Schaumburg while Lake Erie counters with LHP Nick Deeg (2-0, 0.47). Make the Boomers part of your plans this summer by calling (847) 461-3695.