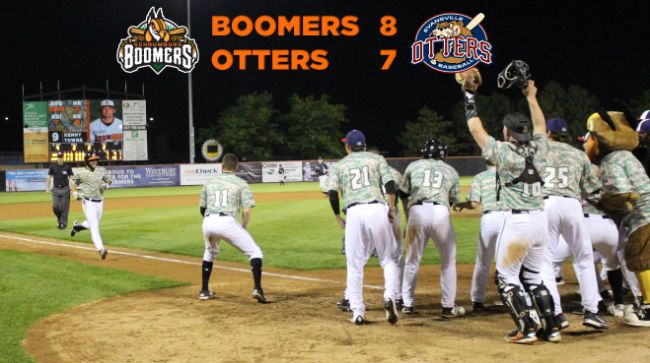 SCHAUMBURG, IL — The defending Frontier League champion Schaumburg Boomers, presented by Wintrust Community Banks, rallied from down five runs to win a series and cross the .500 mark for the first time on the season when Kenny Towns drilled a walk-off homer in the bottom of the ninth.

Towns fell behind in the count 0-2 to Evansville closer Mitch Aker before battling back to even things and then tucking a 2-2 pitch inside the left field pole for a walk-off homer, just the third in team history. Evansville tallied three first-inning runs and added four in the second to open a 7-2 lead in the contest. The Boomers battled back with clutch two-out hitting throughout the night. Collin Ferguson drove home a pair with a two-out single in the second. Jack Parenty tripled home a tandem with two outs in the third and James Keller tied the game with a two-out pinch-hit RBI double in the seventh. All eight runs scored with two outs as Towns also knocked home two with a first-inning two-out single.