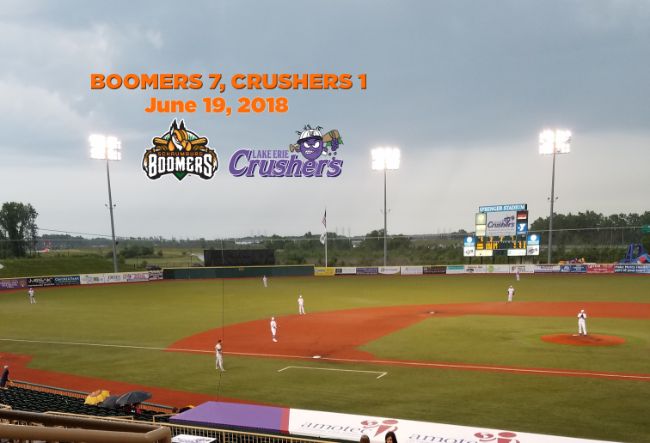 AVON, OH — The defending Frontier League champion Schaumburg Boomers, presented by Wintrust Community Banks, jumped out to an early lead and scored in five different innings to score a fifth consecutive win over the Lake Erie Crushers by a 7-1 decision on Tuesday.

Jack Parenty led off the game with a walk and scored later in the inning when Collin Ferguson lifted a sacrifice fly. Three consecutive doubles with two outs in the third led to two more runs and a 3-0 margin. Ty Moore opened the string, Sean Godfrey doubled home the first run and Ferguson followed with another two-bagger. Kenny Towns made the score 4-0 with a fourth inning sacrifice fly. Zack Weigel picked up a two-run single in the fifth and the final run crossed on a wild pitch in the ninth.

Sam Myers started but exited the game after just 1.2 innings due to injury. Darrell Thompson earned the win with 2.1 innings of relief. Dylan Stutsman notched 3.1 scoreless frames, retiring nine in a row at one point. Stutsman struck out five including fanning the side in the seventh. Chris Hall closed out the win by working the final 1.1, recording three strikeouts as the pitching staff posted 11 punchouts. The offense finished with 13 hits, three each coming from Weigel and Godfrey. Weigel has reached base in 11 consecutive contests. Schaumburg dropped the first two meetings of the year with Lake Erie but have won five straight, including four in a row on the road.