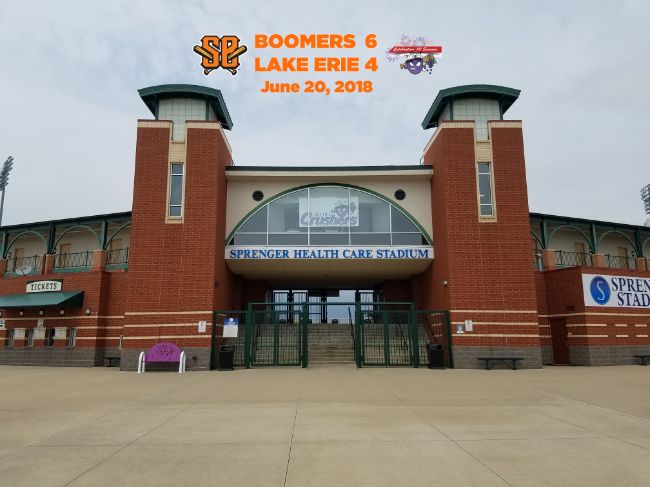 AVON, OH — The defending Frontier League champion Schaumburg Boomers, presented by Wintrust Community Banks, scored a season high seven runs in the top of the first inning, streaking to a 9-4 win over the Lake Erie Crushers, a sixth straight against the second place team in the East.

Jack Parenty and Kenny Towns opened the game with singles before Ty Moore walked to load the bases. Sean Godfrey opened the scoring with an RBI single. Collin Ferguson drove home a run with a groundout, Dylan Jones coaxed a bases loaded walk to make the score 3-0. Nick Oddo singled home a pair, Nick DiBenedetto tallied an RBI on an error and Parenty lifted a sacrifice fly as Schaumburg sent 11 to the plate in the first, tallying four hits with three walks and an error. The Boomers bounced Lake Erie starter Juan Perez in the second, scoring another run on a single from Oddo.

Gunnar Kines benefitted from the run support, logging six innings. Kines allowed just two runs on seven hits with three walks and a season high seven strikeouts. Isaac Sanchez, signed before the game, made his 2018 debut by striking out three in two blank innings. All nine members of the lineup reached base. Oddo drove home three with Jones knocking in a pair. Parenty and Oddo both notched two hits while Zack Weigel ran his on-base streak to 12 with a pair of walks. Parenty has hit safely in seven straight. Lake Erie won the first two meetings of the season with Schaumburg in early June but have lost six in a row including five at home.

The Boomers (18-16) are two games over .500 for the first time this season and will try to sweep the series on Thursday night. RHP Payton Lobdell (1-2, 3.04) will again face his former team for the Boomers while Lake Erie counters with RHP Donald Murray (2-4, 5.55). Schaumburg returns from the trip on June 22 to begin a six-game homestand. Make the Boomers part of your plans this summer by calling (847) 461-3695.