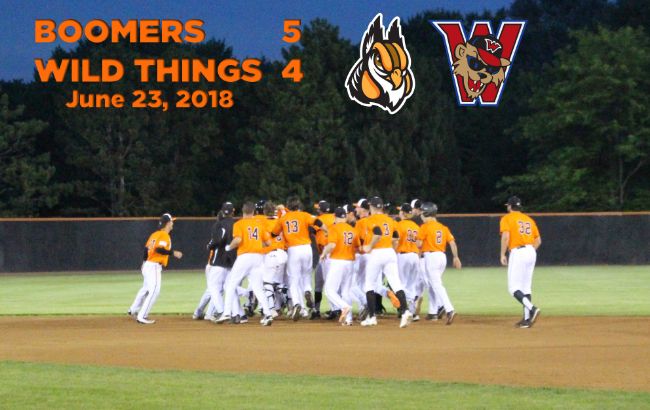 SCHAUMBURG, IL — The defending Frontier League champion Schaumburg Boomers, presented by Wintrust Community Banks, scored a second consecutive one-run victory over the team with the best record in the league, walking off with a 5-4 victory over the Washington Wild Things before the largest crowd of the season.

Sean Godfrey recorded his second walk-off hit of the year, floating a 2-2 pitch into left to score Josh Gardiner with the game-winner. The run was the first of the year allowed by Washington closer Zach Strecker in a league high 21 appearances. Schaumburg held the lead for most of the game, providing support for rookie starter Keaton Conner.

Collin Ferguson doubled home the first run with two outs in the third. Washington evened the game in the fifth before Dylan Jones roped his first career homer, a two-run shot, in the last of the sixth to make the score 3-1. Washington scored in each of the final three innings to tie the contest, but the Boomers had a counter each time. Ty Moore homered in the seventh, pushing the margin to 4-2 before the late heroics.

Conner, signed before the game out of NCAA Division III power Concordia University Chicago to make his first professional start, allowed one run in six innings, walking two and striking out four in a no-decision. James Mulry earned the win in relief, entering after the Wild Things tied the game against closer Jake Joyce. Moore and Godfrey each picked up two hits in the win. Schaumburg connected on multiple homers for the first time in a game this season.