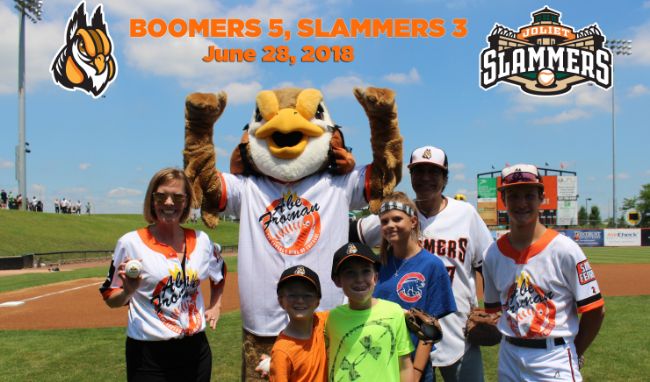 The visitors scored an unearned run in the top of the second and built a 3-0 edge on a two-run homer from Danny Zardon in the third. Schaumburg starter Gunnar Kines, activated from injured reserve before the game, settled down, retiring the next 10 batters to allow the Boomers an opportunity to rally. Kenny Towns logged two-out RBI singles in the third and fifth to draw the Boomers within 3-2. Schaumburg grabbed control with three runs in the sixth. Dylan Jones led off with a single and Nick Oddo followed with a double. Josh Gardiner singled home the tying run while Jack Parenty bunted home to go-ahead tally. Ty Moore also lifted a sacrifice fly in the frame.

Kines finished with six innings of work to win his second consecutive quality start. The lefty struck out eight. Chris Hall and Ivan Vieitez bridged the gap to Jake Joyce, who struck out the side in the ninth to nail his eighth save. Towns finished with three hits as the Boomers tallied 10. Oddo and Jones posted two apiece.

The Boomers (22-19) head on the road for three games this weekend against the Washington Wild Things. RHP Keaton Conner (0-0, 1.50) takes the ball in the opener Friday night at 6:05 p.m. against RHP Chase Cunningham (2-2, 5.07). Schaumburg returns home to celebrate Independence Day on July 3 with the first of back-to-back nights of fireworks on a $1 Hot Dog Tuesday. Make the Boomers part of your plans this summer by calling (847) 461-3695.