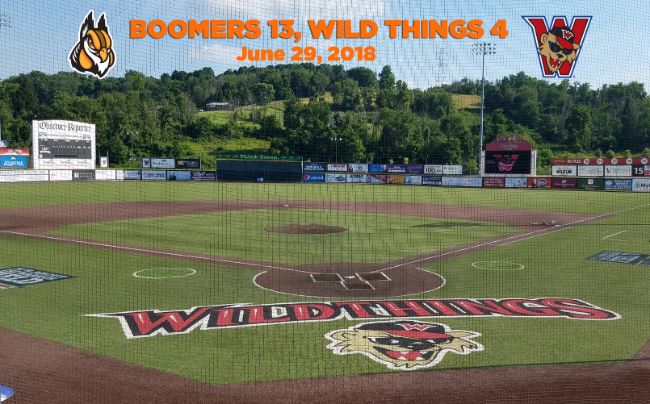 WASHINGTON, PA — The defending Frontier League champion Schaumburg Boomers, presented by Wintrust Community Banks, put together the best offensive performance of the season and one of the best in franchise history to run past the Washington Wild Things 13-4 in the opener of a weekend series in Pennsylvania on Friday night.

Schaumburg sent 11 men to the plate in the top of the first, opening a 5-0 lead. Ty Moore tripled home a pair as the third batter of the game. Collin Ferguson, Dylan Jones and Josh Gardiner also drove home runs in the inning. The Boomers pressed the lead to 9-0 by batting around again in the fourth. Moore and Kenny Towns singled home two runs each. Washington scored four unanswered, but the Boomers put the game out of reach with four ninth inning tallies, three of which came around on a double from Towns. Ferguson followed with a triple to score a run.

Every member of the lineup reached base with eight posting multiple hits as the Boomers banged out 21, the third most in a game in franchise history. Towns drove in five and Moore four. Moore, Zack Weigel, Towns, Ferguson and Gardiner all finished with three hits. Mitch Schulewitz earned the win in relief by working three scoreless frames. Starter Keaton Conner lasted 4.1 innings, walking five.

The Boomers (23-19) continue the series on Saturday night at 6:05 p.m. RHP Will Stillman will make his second start. Schaumburg returns home to celebrate Independence Day on July 3 with the first of back-to-back nights of fireworks on a $1 Hot Dog Tuesday. Make the Boomers part of your plans this summer by calling (847) 461-3695.