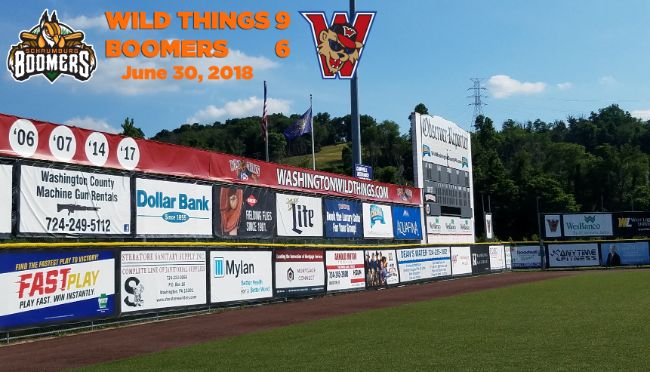 WASHINGTON, PA — The defending Frontier League champion Schaumburg Boomers, presented by Wintrust Community Banks, kept battling but stranded the tying runs on base in the ninth inning of a 9-6 loss at the hand of the Washington Wild Things on Saturday night.

Washington opened a 3-0 lead in the game with two runs in the second inning and a single tally in the third. Ty Moore opened the fourth inning with a triple and scored the first run for the Boomers on a groundout from Kenny Towns. Trailing 4-1 in the top of the sixth, Moore smashed his second homer of the season, a three-run blast to tie the game. Washington responded with four runs in the bottom of the innings to gain control once more. Zack Weigel singled home two in the seventh to pull Schaumburg within 8-6, and the Boomers loaded the bases with one out in the ninth but could not overtake Washington closer Zach Strecker.