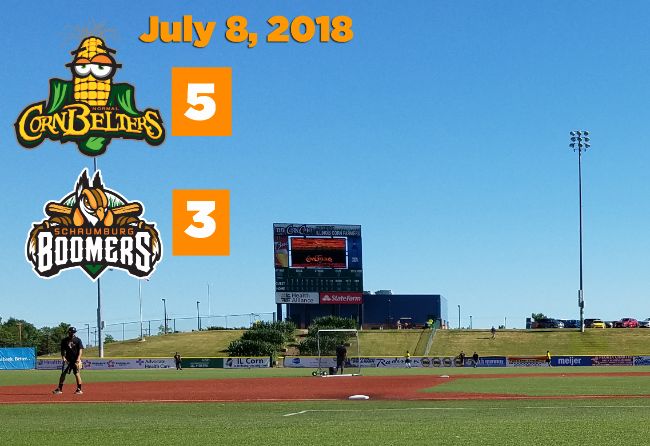 NORMAL, IL — The defending Frontier League champion Schaumburg Boomers, presented by Wintrust Community Banks, could not hold an early lead, dropping a 5-3 decision to the Normal CornBelters in the final game before the league’s All-Star break.

The Boomers jumped on Normal All-Star Jack Landwehr in the top of the first, scoring three runs. Jack Parenty led off the game with a single and scored on a two-run homer from Zack Weigel, his second of the weekend. Collin Ferguson added a solo homer with two outs in the inning. Schaumburg would not score again in the contest and Normal took advantage of three errors to grab the series win. Andrew Godbold connected on a go-ahead three-run homer in the bottom of the third to cap a four-run inning.

The Boomers (26-24) will send four representatives to the All-Star Game on Wednesday night in Parenty, Nick Oddo and Payton Lobdell for the rookie team with Kenny Towns on the experienced roster. Towns and Parenty will start. The Boomers open the second portion of the season on Friday night at Traverse City. The team does not play at home again until July 20. Make the Boomers part of your plans this summer by calling (847) 461-3695.