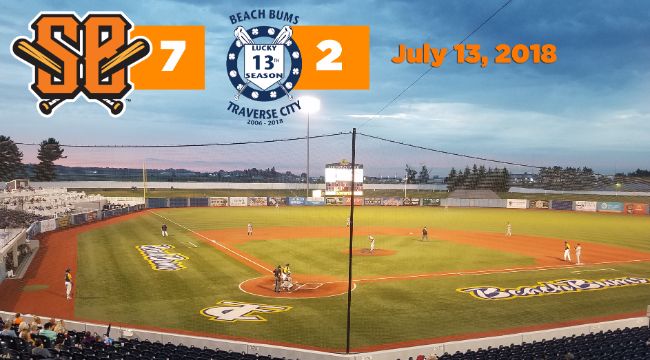 TRAVERSE CITY, MI — The defending Frontier League champion Schaumburg Boomers, presented by Wintrust Community Banks, jumped out to an early lead and raced to a 7-2 victory over the Traverse City Beach Bums in the opener of the second half on Friday night in Michigan.

The Boomers grabbed a 3-0 lead in the top of the first and did not trail. Jack Parenty led off with a single and moved to second when Sean Godfrey followed with a basehit. Parenty scored the first run when Zack Weigel reached on an error after sending a screamer to second. Ty Moore made the score 3-0 just four batters into the contest with a double into the left field corner. Godfrey pushed the lead to 4-0 with an RBI double in the fourth and Moore made it 6-0 with a two-run single in the sixth.

The early run support was more than enough for Joe Hauser, who carried a shutout into the seventh. Hauser, who had gone 14.2 innings without allowing a run to Traverse City this year, allowed just two runs in the seventh while walking one and striking out four in improving to 5-4 on the season. Darrell Thompson, Ivan Vieitez and James Mulry finished out the win. The pitching staff struck out 10 in the victory.

Parenty and Godfrey each reached base four times, notching three hits. Parenty scored three times. Moore drove home four and tallied three hits as the Boomers finished with 12. Eight of the nine members of the lineup reached base with seven posting a hit.