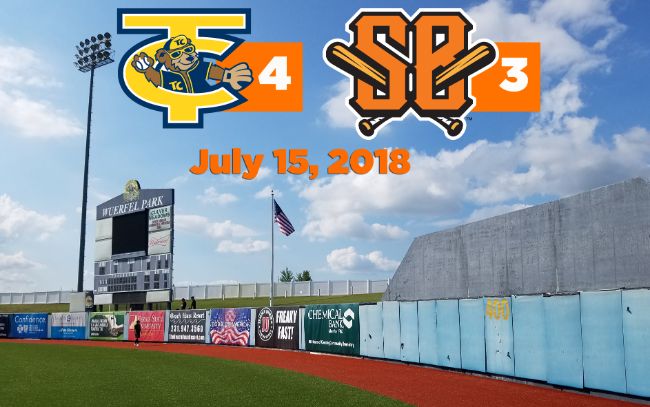 TRAVERSE CITY, MI — The defending Frontier League champion Schaumburg Boomers, presented by Wintrust Community Banks, could not hold a 3-1 lead in the ninth inning, dropping a 4-3 decision to the Traverse City Beach Bums to lose two of three in Michigan.

The Boomers scored in the first inning for the fifth consecutive contest, grabbing an early 1-0 edge. Jack Parenty led off the contest with a double and scored on a fielder’s choice off the bat of Ty Moore. Gunnar Kines retired the first 10 Traverse City batters on the mound before a single run in the fourth tied the score. Parenty put the Boomers ahead at 2-1 with a two-out RBI single to score Nick Oddo in the top of the fifth and Zack Weigel homered in the sixth to make the score 3-1. Traverse City drew four walks in the ninth and scored the winning run on a two-out single to right from Isaac Benard.

Kines departed after five innings with the lead, allowing just one run while striking out three. Ivan Vieitez tossed two scoreless innings and Chris Hall worked the eighth to bridge the gap to Jake Joyce, who struck out a pair in the ninth but suffered the loss. Schaumburg finished with only six hits against three Traverse City hurlers. Parenty finished 2-for-4 with a run and an RBI.

The Boomers (27-26) will take Monday off before continuing the roadtrip on Tueesday night at Southern Illinois. All-Star RHP Payton Lobdell (2-4, 2.68) takes the ball in the 7:05 p.m. opener. Schaumburg returns home on July 20 for just the second series in the month. Make the Boomers part of your plans this summer by calling (847) 461-3695.