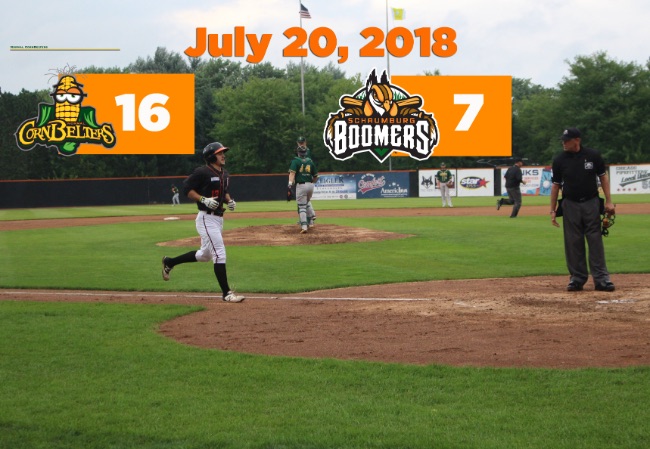 SCHAUMBURG, IL — The defending Frontier League champion Schaumburg Boomers, presented by Wintrust Community Banks, opened a weekend home series with a 16-7 defeat at the hands of the Normal CornBelters to halt a three-game win streak.

Normal scored four runs in the top of the first against starter Griffin Bremer, signed before the game. The CornBelters jumped ahead just two batters into the contest. Schaumburg battled back with three runs in the bottom of the inning to pull within 4-3. Zack Weigel drilled a two-run homer and Kenny Towns added a solo shot in the frame. The visitors began to pull away by scoring the next six runs and finished with 21 hits in the victory.

Bremer worked three innings to suffer the loss in his debut, allowing seven runs. The Boomers finished with 12 hits in the game, which was called with one out in the bottom of the ninth due to rain. Weigel finished with three hits. Ty Moore drove home three, notching a two-run single in the seventh. The top of the lineup combined for seven hits and five runs.