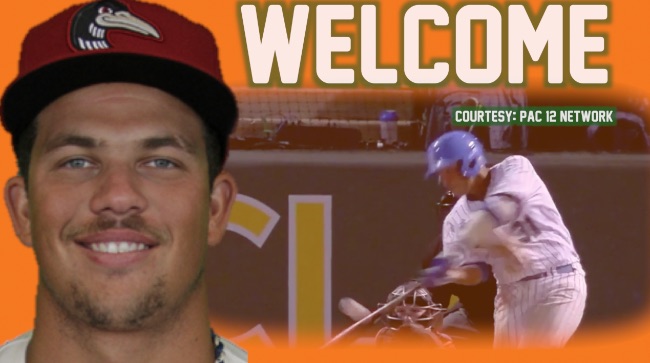 Miller Jr. last played for the Midwest League’s Great Lakes Loons, the Class A affiliate of the Los Angeles Dodgers. The right-handed hitter batted .310 with two home runs in 15 games played with the Loons before his release. Now beginning a new chapter of his career with the three-time Frontier League Champion Schaumburg Boomers, Miller Jr. is already drawing praise from Boomers manager Jamie Bennett.

“His numbers in affiliated ball were outstanding,“ Bennett said. “He shows some strike zone presence, a good walk to strikeout ratio and has got a little juice in the bat.”

Hailing from Fullerton, California, Miller Jr. grew up in an athletically star-studded family as the son of former California Angels catcher Darrell Miller and the nephew of basketball legends Cheryl and Reggie Miller. But while his family was athletically gifted, Miller Jr. said his dad never pressured him into sports and a career in professional baseball.

“He’s always been very hard on me, but he never really pushed me to feel like I had to play baseball,” said Miller Jr. “It just kind of organically came to the decision that I wanted to play baseball.”

In high school, Miller Jr. was selected as a 2012 Rawlings All-American during his senior year at Servite High School in Anaheim, California. That season, Miller, Jr. was chosen in the 34th round of the draft by the Philadelphia Phillies. Miller, Jr. battled through adversity while playing collegiately at UCLA, fighting to overcome injuries before missing the entirety of the 2016 season due to injury.

Miller Jr. graduated from UCLA in 2016 with a degree in African American Studies and a minor in Sociology. He was given a chance as a free agent sign by the Kansas City Royals in February 2017 and spent a season in the Royals Rookie Ball affiliate, the Idaho Falls Chukars, before being traded to the Los Angeles Dodgers. Miller, Jr. batted an eye-popping .376 for Idaho Falls in his first professional season in 2017, winning the Pioneer League batting title while earning All-Star status.

As the Boomers enter the stretch run of the 2018 season in the middle of a crowded race for the Frontier League playoffs, manager Jamie Bennett believes Miller, Jr. can pick up from where he left off in affiliated ball and help provide depth and versatility to the Boomers lineup and defense.

“Any time you get a player like that, that can come in and give you a little bit of a boost as far as team character, in the clubhouse and do some stuff on the field for us as well, that’s a real big help for us,” said Bennett.