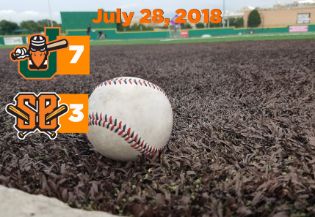 JOLIET, IL — The defending Frontier League champion Schaumburg Boomers, presented by Wintrust Community Banks, allowed five runs in the bottom of the third in a 7-3 loss at the hands of the Joliet Slammers in the middle game of a road series on Saturday night.

Schaumburg stranded five on base in the first two innings against Joliet starter Liam O’Sullivan, who started the All-Star Game. The Slammers tallied single runs in each of the first two innings against Schaumburg All-Star Payton Lobdell to open a 2-0 edge. Collin Ferguson evened the game with a two-run double in the top of the third. Joliet sent 10 to the plate in the bottom of the third and scored five runs on six hits. The Slammers did not record another hit the remainder of the game. Dylan Jones singled home a run in the ninth, but a double play ended the game.

Lobdell suffered the loss despite spinning a quality start. The righty retired the final 13 batters of his outing and allowed just three earned runs in seven innings, striking out six. Jones, Ferguson and Nick Oddo each notched two hits in the game. Zack Weigel and Jack Parenty both extended on base streaks. Parenty has now reached in 20 straight, longest streak of the year, while Weigel has been aboard in 19 consecutive contests.

The series and seven-game roadtrip end on Sunday afternoon with a 1:05 p.m. rubber game against Joliet. RHP Joe Hauser (7-4, 3.55) will make his third appearance on the mound of the week while Joliet counters with RHP Daren Osby (3-1, 3.91). Schaumburg returns home on Tuesday night. Make the Boomers part of your plans this summer by calling (847) 461-3695.