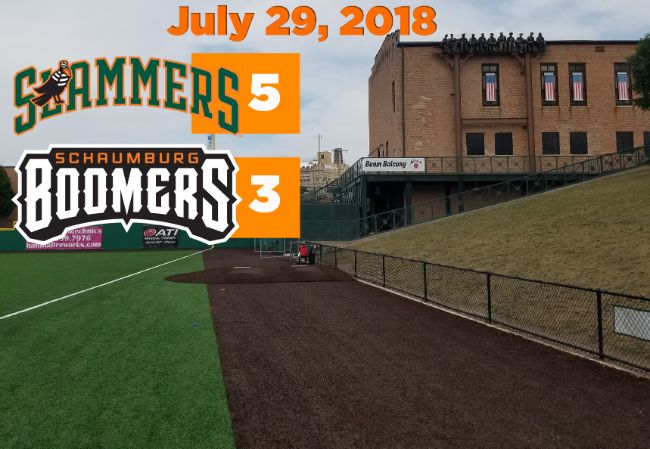 Joliet’s Justin Garcia homered twice in the game, his league leading 18th and 19th longballs. After the Boomers left two on base in the top of the first, Danny Zardon doubled home the first run for the Slammers just three batters into the game. Garcia followed with his first homer of the day, a two-run shot to make the score 3-0. Zack Weigel singled home Michael Hartnagel in the top of the third, but the Boomers scored just one run despite loading the bases in the inning. Garcia homered again the bottom of the fourth to further the edge. Ty Moore deposited a two-run homer over the wall in right to draw Schaumburg within 4-3 in the fifth, but another run scored for Joliet in the bottom of the inning to account for the final.

The bullpens for both team prevented any further scoring. James Mulry, Chris Hall and Jake Joyce combined to retire the final 11 Joliet batters, six of which came via strikeout. Hall struck out the side in the seventh. Joe Hauser, pitching for the third time this week, took the loss. Hauser allowed four runs in four innings. Moore tallied three hits for Schaumburg and notched eight in the series, which saw Joliet win two-of-three.

The Boomers (35-31) are back at home on Tuesday night to begin a brief three-game stint against the Florence Freedom, who are battling in a tight West Division cluster. The 6:30 p.m. affair serves as Breast Cancer Awareness Night presented by Women’s HealthFirst. Schaumburg will wear pink jerseys and there will be pink merchandise with proceeds benefitting breast cancer research. RHP Chris Powell (0-1, 3.38) is slated to make his second start with the team in the series opener. Schaumburg will be home 17 times in the month of August. Make the Boomers part of your plans this summer before it is all gone by calling (847) 461-3695.