Moore Tabbed as Player of the Week 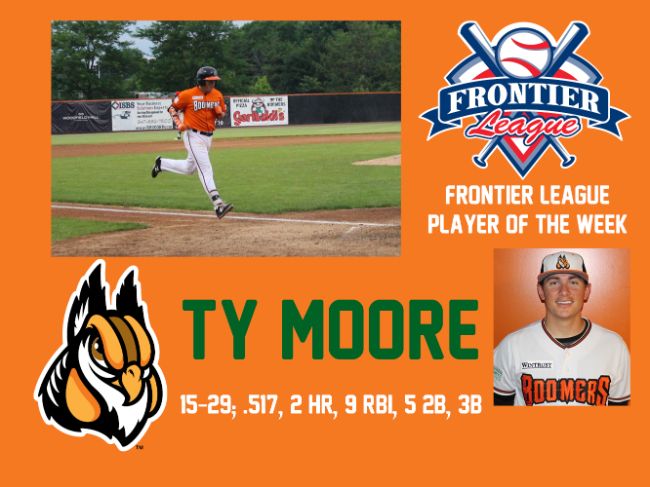 SCHAUMBURG, IL — The defending Frontier League champion Schaumburg Boomers, presented by Wintrust Community Banks, are pleased to announce that outfielder Ty Moore has been selected as the Frontier League’s Player of the Week.

Moore is the first player of the week selection for the Boomers this year. The left-handed hitter racked up five multi-hit performances during a seven-game roadtrip for the Boomers, which concluded on Sunday at Joliet. Moore hit safely in six of the seven games and totaled 15 hits in 29 at bats for an average of .517. The first-year Boomer homered twice and drove home nine during the week. Moore produced four hits and three RBIs in the opener at Joliet on Friday, hitting the game-winning homer in the top of the ninth. The UCLA product also tallied his seventh triple of the season on Wednesday morning at Windy City, matching the team’s single season mark. Moore posted eight extra-base hits with five doubles, two homers and a triple.

Schaumburg has seen 13 weekly award winners in franchise history. Pointstreak, the official statistical provider of the Frontier League and the Independent Professional Baseball Federation, makes the selections every week and has been selecting winners since 2014. Moore’s award is the ninth for a Schaumburg hitter. Seth Spivey won three last year with David Harris adding two.

The Boomers (35-31) are back at home on Tuesday night to begin a brief three-game stint against the Florence Freedom, who are battling in a tight West Division cluster. The 6:30 p.m. affair serves as Breast Cancer Awareness Night presented by Women’s HealthFirst. Schaumburg will wear pink jerseys and there will be pink merchandise with proceeds benefitting breast cancer research. RHP Chris Powell (0-1, 3.38) is slated to make his second start with the team in the series opener. Schaumburg will be home 17 times in the month of August. Make the Boomers part of your plans this summer before it is all gone by calling (847) 461-3695.