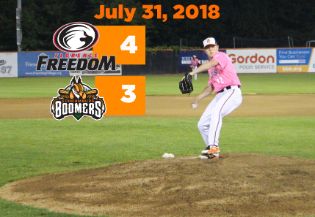 SCHAUMBURG, IL — The defending Frontier League champion Schaumburg Boomers, presented by Wintrust Community Banks, had the tying run thrown out at third in the bottom of the ninth in a 4-3 defeat at the hands of the Florence Freedom in the series opener on Tuesday night.

The Boomers jumped out quickly with a pair of runs in the bottom of the first. Jack Parenty led off the game with a single and moved to third on a basehit from Zack Weigel. Ty Moore, the Frontier League’s Player of the Week, opened the scoring with an RBI double to deep right. Collin Ferguson made it 2-0 by knocking home Weigel with a groundout. Florence tied the game with two unearned runs in the fourth and tacked on two more in the fifth to grab the lead. Parenty drove home pinch-runner Sean Godfrey with a two-out double to center in the bottom of the ninth but was thrown out at third to end the game.

Starter Chris Powell suffered the loss, allowing two earned runs in five innings of work. James Mulry, Mitch Schulewitz and Jake Joyce did not allow a run over the final four frames with Mulry throwing two innings. Schaumburg finished with 10 hits, three from Parenty and two from Moore. Parenty has reached base in 22 consecutive contests while Weigel has been aboard in 21 straight.

The Boomers (35-32) are in the midst of a crowded playoff race as the calendar turns to August. Schaumburg plays at home 17 times in the month of August including tomorrow morning in an 11:00 a.m. Day Camp game. RHP Kit Fowler (0-5, 5.77) will start the morning affair. Make the Boomers part of your plans this summer before it is all gone by calling (847) 461-3695.