Boomers Blanked by Bums in Finale 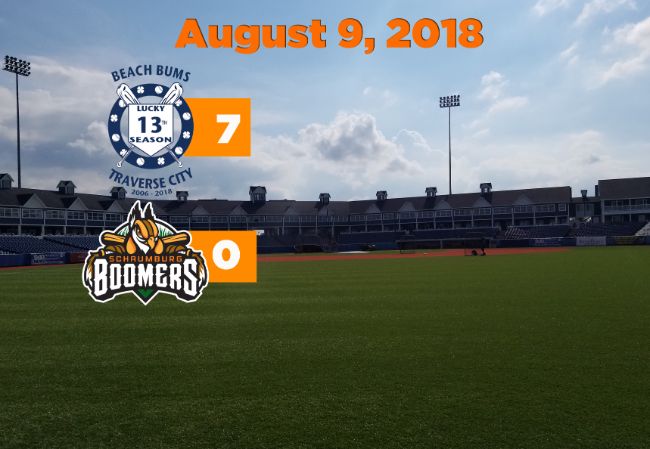 TRAVERSE CITY, MI — The defending Frontier League champion Schaumburg Boomers, presented by Wintrust Community Banks, managed only six hits in a 7-0 loss at the hands of the Traverse City Beach Bums in the series finale on the road.

Traverse City scored a pair of runs in the bottom of the first, taking advantage of two two-out walks from starter Joe Hauser. The Beach Bums added on by sending nine to the plate in a four-run third. Schaumburg put runners on base but could not break through against four different Traverse City pitchers.

Hauser allowed seven runs in six innings, suffering the loss. The Texan walked four and struck out six while dipping to 7-7. Darrell Thompson and Ivan Vieitez combined to finish the game. Thompson struck out the side in the seventh as the Boomers fanned 11 in the losing effort, a ninth shutout defeat of the season. Collin Ferguson finished with three of the six hits, notching a pair of doubles. Zack Weigel reached three times and has been aboard in 29 consecutive games, tied for the second longest streak in team history. The streak is the second longest active streak in the league and the fourth longest of the season.

The Boomers (37-38) continue to battle in a crowded playoff race in the Frontier League. Schaumburg returns home to begin a nine-game homestand tomorrow for Star Wars Night. LHP Gunnar Kines (5-1, 4.15) takes the mound in the opener against the Joliet Slammers, one of the top teams in the league. Make the Boomers part of your plans this summer before it is gone by calling (847) 461-3695.