Boomers Blanked in Near No-Hitter 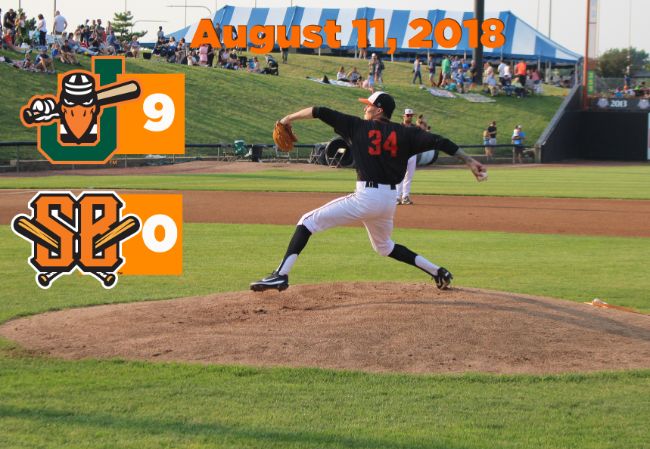 SCHAUMBURG, IL — The defending Frontier League champion Schaumburg Boomers, presented by Wintrust Community Banks, managed just one hit in a 9-0 loss at the hands of the Joliet Slammers on Saturday night.

Schaumburg created opportunities against Joliet starter Corey Kimber but could not notch a hit despite drawing seven walks and having runners on base in five of the six innings against the righty. Kimber departed with a 2-0 lead having not allowed a hit after six innings when Joliet scored two unearned runs in the top of the sixth. Reliever Nate Antone retired the first two batters of the sixth before Tyler Wolfe fired a grounder up the middle that Joliet shortstop Chaz Meadows made a diving, spinning attempt on but Wolfe reached for the lone hit of the game.

Payton Lobdell suffered the loss despite working six innings on the mound. Lobdell struck out five and allowed eight hits. Zack Weigel drew a pair of walks, extending his on-base streak to 31 games, a new Schaumburg record. The streak is the second-longest active streak in the league and the third longest of the season in the league. Schaumburg has been involved in four straight shutouts and have been blanked 10 times this season.

The Boomers (38-39) continue to battle in a crowded playoff race in the Frontier League in the final three weeks of the year. Schaumburg continues a nine-game homestand tomorrow night with the final game against Joliet at 1:00 p.m. RHP Chris Powell (0-3, 2.84) starts for the Boomers opposite RHP Scot Hoffman (7-4, 3.65). Make the Boomers part of your plans this summer before it is gone by calling (847) 461-3695.