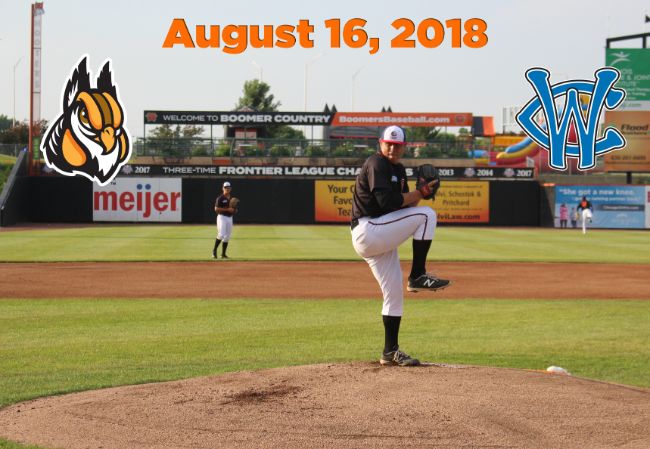 SCHAUMBURG, IL — The defending Frontier League champion Schaumburg Boomers, presented by Wintrust Community Banks, split a doubleheader with the Windy City ThunderBolts on Thursday in a pair of games decided in the final at bat.

Picking up Wednesday’s suspended game in the top of the first, the Boomers rallied from a pair of deficits to win the opener. Axel Johnson homered before the delay last night to give Windy City a 1-0 lead. Schaumburg tied the game in the fifth on a delayed double steal. Dylan Jones took off for second and Kenny Towns trotted home to tie the score. Windy City led again at 2-1 with a run in the top of the seventh. The Boomers were able to tie the score in the bottom of the inning with an unearned run when Sean Godfrey singled home Jones. The opener came to a close on the first pitch of the bottom of the ninth when Nick Oddo launched his second homer of the season over the wall in right to end the game. The walk-off homer marked the second of the season for the Boomers and the third in franchise history.

Payton Lobdell worked seven innings in a no-decision, allowing two runs on six hits with a walk and two strikeouts. Jake Joyce gathered the win in relief, working the final .2 innings to improve to 3-1 on the year. Godfrey tallied two hits as the Boomers finished with eight.

Schaumburg grabbed a 1-0 lead in the bottom of the third in game two but could not hold off Windy City. Zack Weigel led off the inning with a walk and scored on a sacrifice fly from Collin Ferguson. Gunnar Kines had allowed only one-hit, and carried a shutout into the seventh with two outs before Windy City put together three straight hits to tie the game and a pair of walks to pick up the win. Down to the final strike, Matt Brown tied the game with an RBI single and Joe Becht forced home the winning run with a walk.

Kines suffered the hard luck loss after having a 17.2 inning scoreless streak end. The streak was the longest of the season by a Schaumburg pitcher. The lefty allowed two runs and struck out eight. Weigel reached base in both ends of the doubleheader to extend his franchise record on-base streak to 35 games, second longest in the league this year. Five different individuals notched hits for Schaumburg in the second game.

The Boomers (40-41) continue a season long nine-game homestand when the Lake Erie Crushers visit on Friday night at 6:30 p.m. The contest will feature postgame fireworks and the annual Doumak Campfire Marshmallow Fight. RHP Quinn DiPasquale (1-1, 6.00) makes the start in the contest. The Boomers have nine home contests left in the year. Make the Boomers part of your plans this summer before it is gone by calling (847) 461-3695.