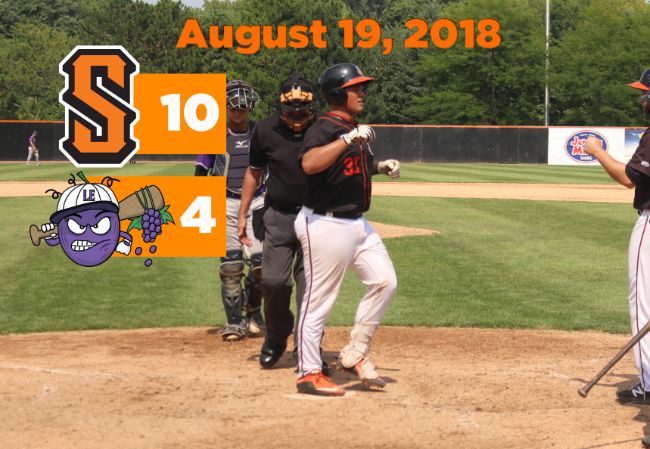 SCHAUMBURG, IL — The defending Frontier League champion Schaumburg Boomers, presented by Wintrust Community Banks, went from nearly being no-hit to erupting for nine runs in the seventh inning to upend the Lake Erie Crushers 10-4 and win the series on Sunday afternoon.

Lake Erie opened a 1-0 lead in the first inning against newly signed starter Hendry Rodriguez. The Crushers extended the lead to 2-0 on a solo homer from Joel McKeithan in the top of the sixth. The Boomers did not have a hit against Lake Erie starter Oriel Caicedo until Clint Hardy led off the bottom of the sixth inning with his first professional homer, slicing into the deficit. The Crushers furthered the lead with a run in the top of the seventh before the bats exploded for the Boomers. Darrell Miller, Jr. put Schaumburg ahead with one swing, a three-run homer. Kenny Towns added a two-run shot and Zack Weigel capped a nine-run inning with his eighth homer of the season. The Boomers sent 12 to the plate in the inning and matched the most runs in a single frame this year.

Rodriguez worked 6.2 innings and allowed three runs in his debut, walking three and striking out four. Darrell Thompson came away with the win, improving to 5-0 on the year after recording the final out of the seventh. Weigel finished with two hits and three RBIs, extending his franchise record on-base streak to 38 games. Hardy also finished with two hits as the Boomers logged eight in the win. The four homers were the most in a game this season.

The Boomers (42-42) finished 5-4 on the nine-game homestand and will hit the road for three games with the Washington Wild Things beginning on Tuesday night at 6:05 p.m. in Pennsylvania. RHP Payton Lobdell (4-7, 2.74) will take the ball in the opener against LHP Thomas Dorminy (8-4, 2.15). With 12 games remaining, the Boomers are just two back of the final playoff slot. Schaumburg has six home contests remaining this year. Make the Boomers part of your plans this summer before it is gone by calling (847) 461-3695.