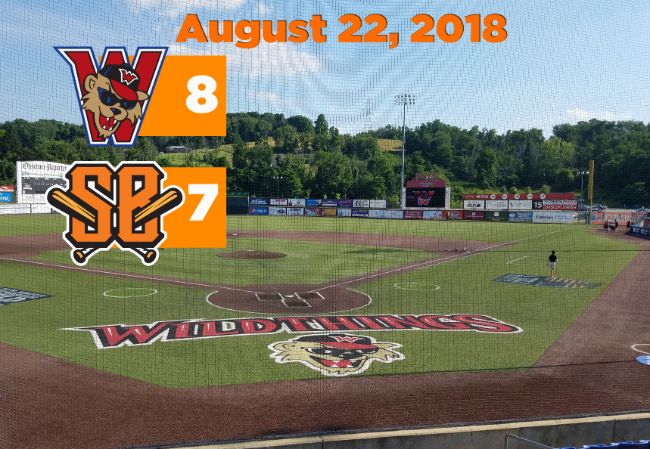 WASHINGTON, PA — The defending Frontier League champion Schaumburg Boomers, presented by Wintrust Community Banks, could not hold a five-run lead in the middle game of a series with the East Division leading Washington Wild Things, suffering an 8-7 defeat.

Schaumburg jumped ahead early, scoring four times in the top of the first. Jack Parenty led off the game with a single and scored the first run of the night on an RBI single from Zack Weigel. Collin Ferguson extended the lead to 3-0 with a two-run triple, his second of the year. Kenny Towns drove home the final run of the inning with a single to plate Ferguson. Washington tallied a pair of runs in the fourth to slice into the deficit. Michael Hartnagel padded the Schaumburg lead to 7-2 with his first professional homer in the top of the sixth, a three-run blast. The Wild Things scored a single run in the seventh before stealing the win with five runs in the bottom of the eighth, all unearned. Roman Collins put the hosts ahead for the first time with a two-out, two-run single.

Gunnar Kines departed with the lead, allowing two runs in six innings without issuing a walk to go with nine strikeouts. Kines has posted four straight quality starts. The Schaumburg pitching staff fanned 11 in the loss. Darrell Thompson was hit with the loss, his first of the season. Weigel finished with three hits as the Boomers totaled nine. The three hits extended his franchise record on-base streak to 40 games. The streak is the longest active and the second longest overall in the league this season.

The Boomers (42-44) conclude the brief three-game roadtrip on Thursday night at 6:05 p.m. with RHP Kit Fowler (1-7, 5.37) on the mound against RHP Michael Austin (2-2, 3.68). The season is down to just 10 games remaining and the Boomers are among nine teams vying for the four playoff slots, none of which have been clinched. Schaumburg has six home contests remaining this year and is home for the final time on a weekend beginning Friday night. Make the Boomers part of your plans this summer before it is gone by calling (847) 461-3695.