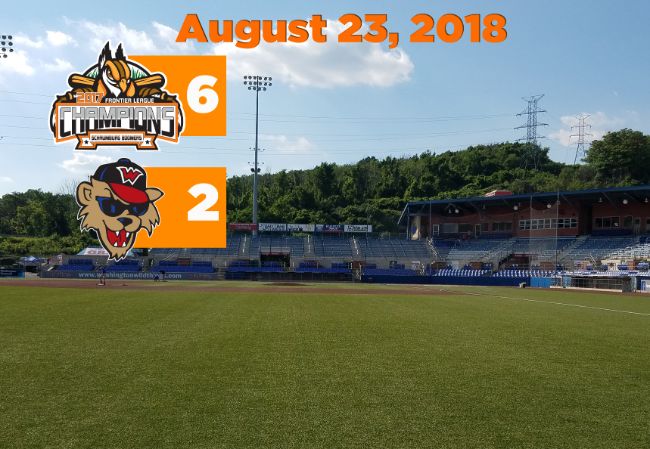 WASHINGTON, PA — The defending Frontier League champion Schaumburg Boomers, presented by Wintrust Community Banks, did not trail in avoiding a sweep by tallying a 6-2 win over the Washington Wild Things on Thursday night.

Kenny Towns gave the Boomers a 2-0 lead by hitting a two-run homer off the pole in left in the top of the second, his seventh of the year. Leading 2-1, the Boomers gained some distance with three runs in the fifth. Sean Godfrey drew a bases loaded walk to force home a run while Ty Moore knocked in a run with a fielder’s choice while the third run scored on an error. Nick Oddo capped the scoring for Schaumburg with a solo homer in the sixth, his third of the year.

Kit Fowler threw seven innings to pick up his second win of the season, allowing two runs on six hits with two walks and four strikeouts. James Mulry and Jake Joyce finished out the victory. Seven different individuals posted hits in the contest. Zack Weigel did not record a hit, but drew a walk in the eighth to extend his franchise record on-base streak to 41 games. The 41-game streak is the second longest in the league this season and one of the longest in league history.

The Boomers (43-44) return home on Friday night to begin the final six-game homestand of the year. The season is down to just nine games remaining and the Boomers remain in a crowded battle for the Frontier League playoffs. RHP Quinn DiPasquale (1-1, 4.26) takes the ball in the opener against the Traverse City Beach Bums, who counter with RHP RHP Tyler Thornton (1-1, 1.64). The first 1,000 fans will receive a winter hat on the final home Friday of the year, which also features fireworks in the 6:30 p.m. affair. Make the Boomers part of your plans this summer before it is gone by calling (847) 461-3695.