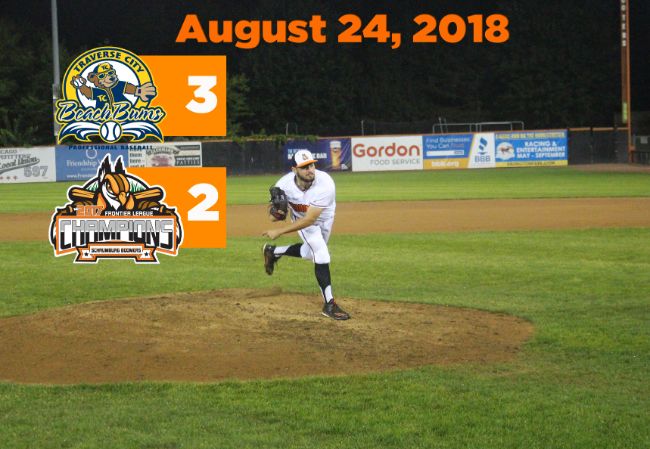 SCHAUMBURG, IL — The defending Frontier League champion Schaumburg Boomers, presented by Wintrust Community Banks, could not hold a ninth inning lead in dropping a 3-2 decision to the Traverse City Beach Bums in the opener of the final homestand of the year.

Isaac Benard tripled home two runs with two outs in the top of the ninth to account for the final. Both runs were unearned against Chris Powell, making his first relief outing of the year. Traverse City had placed the tying run on base in every inning from the fourth onward but did not score until the ninth. Schaumburg built a 2-0 lead by scoring twice in the second. Nick Oddo led off with a double and moved to third on a wild pitch. Collin Ferguson coaxed a walk to place runners at the corners. Another wild pitch enabled Oddo to score the first run. Dylan Jones added an RBI single. Traverse City’s Luke Lowery homered in the fourth to cut into the deficit. The Boomers loaded the bases in the bottom of the ninth but came up empty, stranding 11 in the game

Traverse City has scored three last at-bat wins over the Boomers this season. Quinn DiPasquale started and worked 4.1 innings, walking one and striking out three. Powell worked 3.2 innings following James Mulry. Jack Parenty, Oddo and Jones tallied two hits each as the Boomers finished with nine. Zack Weigel did not record a hit, but drew two walks to extend his franchise record on-base streak to 42 games. The 42-game streak is tied with Windy City’s Omar Obregon for the longest in the league this season and is believed to be the second longest in league history.

The Boomers (43-45) continue the final homestand on Saturday night with a 6:00 p.m. game on Zombie Night featuring postgame fireworks. RHP Hendry Rodriguez (0-0, 4.05) takes the ball against former Boomer RHP Ken Knudsen (6-2, 4.93). The season is down to just eight games remaining and the Boomers remain in a crowded battle for the Frontier League playoffs. Make the Boomers part of your plans this summer before it is gone by calling (847) 461-3695.