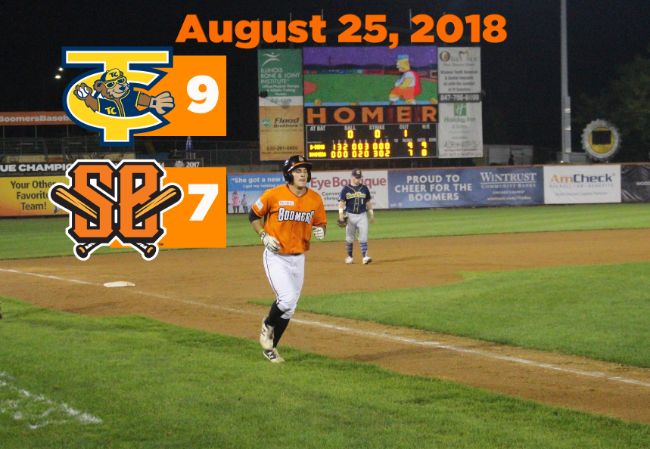 SCHAUMBURG, IL — The defending Frontier League champion Schaumburg Boomers, presented by Wintrust Community Banks, attempted to rally late after falling behind 6-0 but came up just short in a 9-7 loss to the Traverse City Beach Bums on Saturday night.

Traverse City grabbed the lead early when Will Kengor hit his 11th homer of the year with two outs in the top of the first. The Beach Bums added three in the second and two in the third to chase starter Hendry Rodriguez. Zack Weigel lined a two-run single up the middle in the fifth inning to pull the Boomers within 6-2 before a three-run homer from Luke Lowery, his second of the series, stretched the lead to 9-2. Nick Oddo doubled home two of three runs in the seventh and Weigel deposited a two-run homer over the wall in right, his ninth of the year, in the ninth to account for the final. The Boomers put the tying runs on base before the Beach Bums escaped with the win.

The Boomers (43-46) continue the final homestand on Sunday afternoon with the finale against Traverse City at 1:00 p.m. on Bark in the Park and the final Family Sunday. RHP Payton Lobdell (4-8, 3.34) starts for the Boomers while RHP Reinaldo Lopez (8-4, 3.37) is on the hill for the Beach Bums. The season is down to just seven games remaining and the Boomers remain in a crowded battle for the Frontier League playoffs. Make the Boomers part of your plans this summer before it is gone by calling (847) 461-3695.