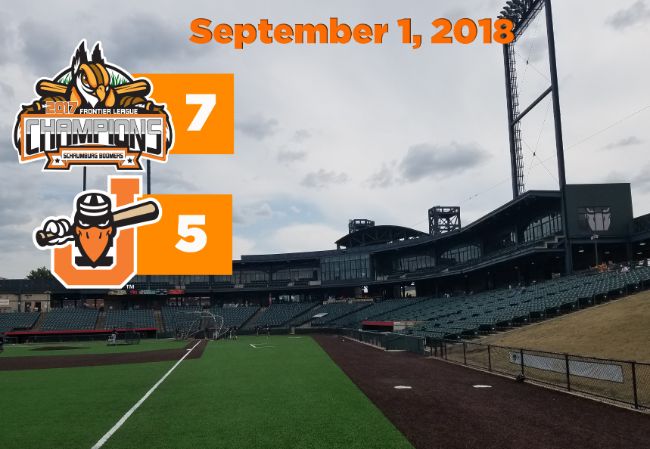 JOLIET, IL — The defending Frontier League champion Schaumburg Boomers, presented by Wintrust Community Banks, scored four times in the top of the seventh to rally past the Joliet Slammers 7-5 on the second-to-last day of the season and hand the Washington Wild Things the East Division title.

Schaumburg built an early 2-0 lead behind single runs in the second and third. Darrell Miller, Jr. singled home Nick Oddo in the second and Zack Weigel plated Michael Hartnagel in the third. Joliet responded with four runs in the bottom of the third on five hits to take the lead. Trailing 4-3, Schaumburg struck in rapid fire fashion to score the runs in the seventh and hang on for the win. Jack Parenty led off with a double and came around on Hartnagel’s second triple of the game. Weigel singled home Hartnagel and was along for the ride on Oddo’s fourth homer. Joliet had chances late but could not overcome the deficit.

Payton Lobdell worked six innings in his final start of the season to notch the win. James Mulry retired the final two batters to log his first save of the year. Both teams finished with 14 hits. Parenty and Oddo tallied three apiece with Hartnagel, Weigel and Tyler Wolfe tacking on a pair. Hartnagel matched the single game franchise record by becoming the fourth player to triple twice in a game. Weigel extended his on-base streak to 49 games. The franchise record is believed to be the second longest in league history. The win broke a four-game skid, and officially clinched the division title for Washington. Joliet will be the first wild card team.