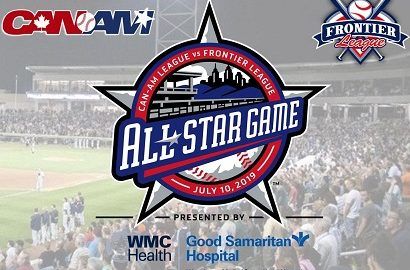 The Rockland Boulders will host the 2019 All-Star Game between the Can-Am League and the Frontier League on Wednesday, July 10, at Palisades Credit Union Park, presented by Good Samaritan Hospital. This will mark the first time that these two Independent Professional leagues will face each other, and only the third time a Can-Am organization has hosted an All-Star game since the league’s re-formation in 2005.

Festivities will begin with a Home Run Derby on Tuesday, July 9, with the game the following evening. “We consider this a great holiday gift to our fans,” stated Boulders Team President Shawn Reilly. “It’s a rare opportunity and we’re very appreciative of the Frontier League and Good Samaritan Hospital making it possible. Many of the best independent pro baseball players in the country will be in our park, and we look forward to putting on a first-class event worthy of that talent.”

"Everyone in the Frontier League is excited to play the Can-Am League in the All-Star Game this year,” noted Commissioner Bill Lee. “We are also excited to come to Rockland and the New York market. We want to thank the Boulders organization for hosting this event. It will be tremendous for the fans to see the best players, of two of the oldest and most established Independent Leagues in the country, showcase their talents. We also believe it is great for the entire Independent Professional Baseball industry that leagues can work together."

The Frontier League consists of 10 teams from cites in Illinois, Kentucky, Indiana, Ohio, Pennsylvania and Missouri. Formed in 1993, the circuit had 23 player contracts purchased by Major League Baseball franchises last season and their list of players to appear in the Majors includes former Boulder Stephen Cardullo, who was with the Florence Freedom in 2012 before spending three seasons in Rockland en route to a stint with the Colorado Rockies.

“The Can-Am League is pleased we will be taking on the Frontier League in the 2019 All Star Game. For 25 years the Frontier League has consistently been a formidable force on the independent baseball scene,” added Can-Am Managing Director Kevin Winn. “I want to thank Frontier League Commissioner Bill Lee and Rockland Boulders President Shawn Reilly for putting this event together. I can think of no better venue than Palisades Credit Union Ballpark to host this historic event.”

Ticket sales and additional information will be announced in upcoming weeks. The Boulders open their All-Star Summer against the defending Can-Am champ Sussex County Miners on Thursday, May 16, 2019. For season tickets and more information, please visit our box office, call 845-364-0009 or slide to rocklandboulders.com.