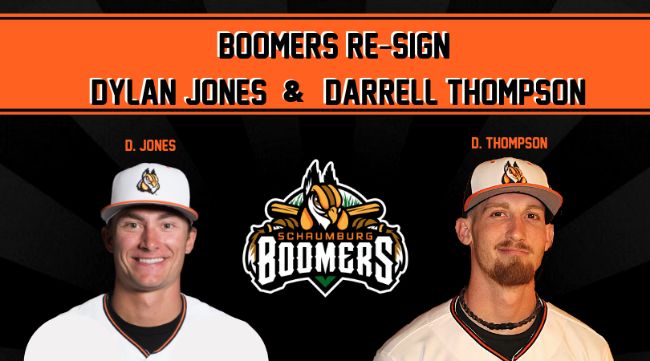 The Schaumburg Boomers, presented by Wintrust Community Banks, have returned two familiar faces for the 2019 season. OF Dylan Jones and LHP Darrell Thompson are set to return to the Boomers in 2019.

Jones attended Flagler College located in St. Augustine, FL where he graduated with a Sport Management degree in 2017. Jones also played four years on the Saints baseball team where in 2017 he was awarded many accolades including: Flagler Male Athlete of the Year, Flagler Baseball MVP, First-Team All-Conference, Flagler Offensive Player of the Year, and NCAA DII Doubles Leader (27). Jones career batting average at Flagler was .329 and on-base percentage of .396.

Left-handed pitcher Darrell Thompson will also return to the Boomers for his second season and enter his third as a professional. In 2018, Thompson was a strong participant out of the bullpen for the Boomers as he appeared in the fourth most games (29) and innings (35.2IP). In those 35.2 innings pitched, Thompson struck out 45 batters and an ERA of 3.78 out of the bullpen.

Thompson attended Shenandoah University located in Winchester, VA where he graduated with an Exercise Science degree in 2016. Thompson also played four years on the Hornets baseball team where he was named first team All-ODAC and ODAC Pitcher of the Year as a sophomore. He also led the league in strikeouts and co-led in wins earning him first team All-Region honors from the ABCA. Thompson had a career ERA of 3.23 at Shenandoah, where he also finished top five in school history in wins (24), strikeouts (231), innings pitched (261), and games started (40).

Prior to joining the Boomers in 2018, Thompson spent time with the Roswell Invaders of the Pecos League in 2016 & 2017, before joining the Gary Southshore RailCats of the American Association at the end of the 2017 season. Thompson held a 3.46 ERA and 8.81 strikeouts per nine innings during his time with both clubs.