Where Are They Now? - Garrett Kelly 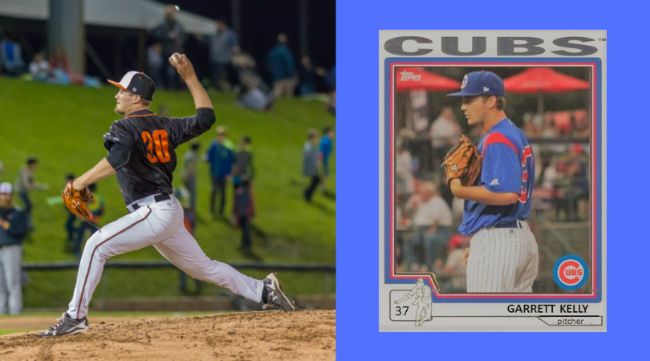 Prior to the 2018 season, 95mph throwing right-handed pitcher, Garrett Kelly, had his contract purchased by the Chicago Cubs from the Schaumburg Boomers. So, where is he now?

Kelly, appeared in 35 games as a reliever for the Schaumburg Boomers in 2017 and finished the season with a 1-0 record, a 1.77 ERA, and an outstanding 1.03 WHIP, ultimately helping the Boomers win a 2017 Frontier League Championship. Kelly also posted a 12.4 K/9IP as he struck out 56 batters in only 40.2 innings of work. The right hander was a solid back end reliever for the Boomers as he held opposing batters to only a .128 AVG. Kelly faced 166 batters in 2017 and allowed only 17 of those batters to get hits while also only walking 24.

After getting his contract purchased by the Chicago Cubs, Kelly was assigned to the South Bend Cubs, a Class A affiliate in the Midwest League. Kelly appeared in 18 games, pitching himself to a 1-1 record, 1.34 ERA, and 32 strikeouts in 33.2 innings pitched for South Bend.

After having success for South Bend, Kelly was promoted to the Myrtle Beach Pelicans, a Class A-Advanced affiliate of the Chicago Cubs in the Carolina League. The right-hander appeared in 5 games out of the bullpen and pitched himself to a 2-1 record, 2.08 ERA, and 9 strikeouts in 8.2 innings pitched. Kelly held opposing batters to just a .161 batting average both at the Class-A and Class A-Advanced level.

Kelly will more than likely start the 2019 season at the Class A-Advanced level where his story and journey will continue.