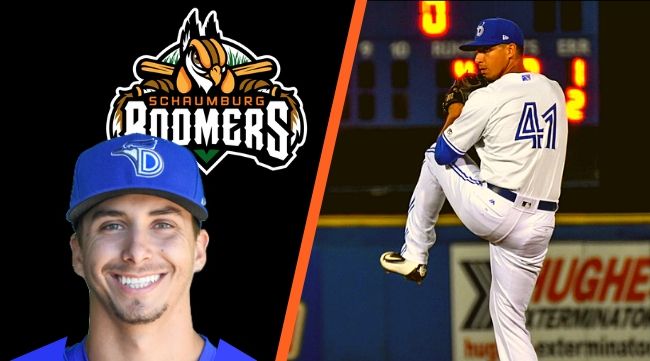 SCHAUMBURG, IL - The Schaumburg Boomers, presented by Wintrust Community Banks, have added to their roster for 2019 by signing right handed pitcher Connor Eller.

Connor Eller will be entering his first season with the Boomers after spending the past three years in the Toronto Blue Jays minor league system. Eller was selected by the Blue Jays in the 22nd round of the 2016 MLB Draft out of Ouachita Baptist University, which is located near his hometown Little Rock, Arkansas.

After being drafted in 2016, Eller was assigned to the Blue Jays advanced-rookie ball club in Bluefield, West Virginia. During his time with the Bluefield Blue Jays he appeared in 17 games and posted a 4-2 overall record and a 2.60 ERA in 34.2 innings pitched. In those 34.2 innings pitched he struck out 33 batters and held opposing hitters to a .186 batting average in his rookie campaign. In 2017 and 2018 Eller split time between the Class A affiliate Dunedin Blue Jays and the Class A-Advanced Lansing Lugnuts, while also starting one game for the Triple-A Buffalo Bisons. The right hander’s minor league career stats with the Blue Jays include a 13-14 overall record with a 4.19 ERA.

Eller was not only an active player on the baseball field, but was also an active player in the community as he was awarded the 2018 Dunedin Blue Jays Community Service Award. This award is given to the Blue Jays player who best represents the team’s commitment to enriching the Dunedin community through a variety of outreach program that promote education, healthy lifestyles, and charity. Eller represented the Blue Jays in the community through numerous appearances away from the ballpark encouraging local children and showing support for local families.

The Boomers 2019 season, presented by Wintrust Community Banks , begins May 10. The Home Opener is Tuesday, May 14 vs. the Washington Wild Things.