Where Are They Now? - Frank Pfister 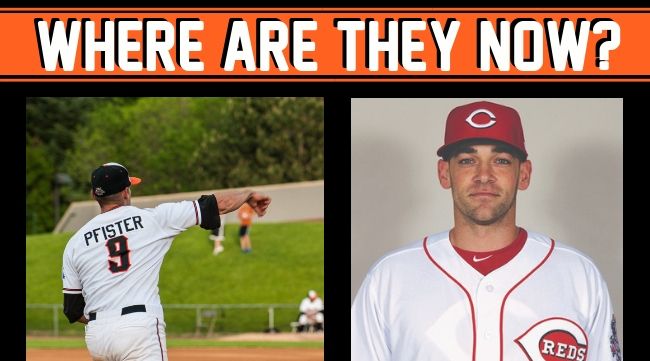 Frank Pfister played for the Schaumburg Boomers from 2012-2013 and hit the first home run in Boomers franchise history, so where is he now?

Prior to joining the Boomers in 2012, Pfister attended Emory University located in Atlanta, GA. Pfister finished among the Eagles career leaders in several categories, including 87 hits his junior year to set the single-season school record. The infielder ended his career at Emory with a .369 career batting average as well as earning a spot on ESPN The Magazine All-District first team.

The third baseman was taken in the 17th round of the 2008 MLB Draft by the Cincinnati Reds. Pfister played four seasons in the minors with the Reds from 2008-2011. The Los Angeles native played majority of his career with the Class A Dayton Dragons of the Midwest League, as well as a select few games in 2011 with the Louisville Bats of the International League, a Class AAA affiliate of the Reds.

In 2012, Pfister was signed by the Boomers just a week prior to the start of Spring Training after playing four seasons in the Reds organization. That year Pfister hit the first home run in Boomers franchise history in his second game with the club, while also leading the league in hits with 121 hits in 2012 and batted .306, which was good for the seventh-best average in the league. He still ranks top five in Boomers franchise history in hits, doubles, home runs, and games started.

Pfister joined the staff on Reds minor league organization following retirement in 2013, and is currently a part of the Player Development staff as a Mental Skills Coach. It’s a position that many minor league teams are starting to emphasis more, but has always been taken very seriously. Teams emphasize everything from in-house visits to psychological profiles when drafting players.

Pfister is on the staff to help the Reds organization in taking the next step in terms of leadership training and character development in prospects. While also ramping up the team’s sports psychology departments, the Reds are looking into new initiatives in how to create that leader prototype that everyone’s looking for.

When asked about Pfister and his time here in Schaumburg, Boomers Manager Jamie Bennett said, “Frank is one of those guys you never forget as a coach. His leadership and personality are contagious. Frank and I remain in touch with one another still. He’s a true ‘baseball’ guy that has a true passion and understanding of the way this game should be approached.”